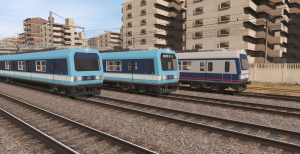 Redistribution of my content and/or conversion of it to Trainz Android is strictly forbidden.

The 5000 Series was introduced in the early 1980s as the first trains for Line 1 of the then-brand-new Cairo Metro. Line 1 was built as a merger of two existing suburban railway lines (the southern Helwan Line from Helwan to Sayyeda Zeinab, wich was already electrified, and the Laymoun Bridge-Marg Railway from Ramses station to Marg) via an underground 4,7 Km-long tunnel with five stations.

The line was designed by french companies and built via a loan from the French government, thus the line was built according to French practices and regulations and with french rolling stock and equipment. Instead of a “true metro”, Line 1 was designed as a RER-type line, based on the RER system of Paris. Taking advantage from the fact that the Helwan line was already electrified at 1500v DC, it was decided that the entire Line 1 was to use the same system, wich was already commonplace in France.

To operate services on the new line, the french consultants started to design a suitable train for the new RER-inspired line. The new trains, designated as the “5000 Series” were primarily based on the RATP MS61 electric multiple units that had been operating on Paris’ RER A Line since 1967, sharing almost the entirety of technical equipment, including bogeys, traction motors, driving desks and the resistor traction control. Of course, many modifications were made, with the 5000 Series being considerably shorter than it’s french counterpart and had the bodyshell almost entirely redesigned.

The 5000 Series trains are formed in 3-car sets, with two power cars fitted with driving cabs, pantograph and roof-mounted braking resistors sandwiching an intermediate trailer car, the same exact formation as the MS61s. These 3-car sets were to be coupled in triplets (forming 9-car sets) for regular services. As they are intended for RER-style services (with longer distances between stations than “conventional” metro systems), the 5000 Series trains have a top speed of 100Km/h, compared to the 80-90 Km/h of “conventional” metro trains (such as the 6000 Series of Cairo’s Line 2). Like the MS61s, the 5000 Series are mono-voltage (1500v DC only) trains.

The first fifty-two 3-car sets, built by Alsthom and ANF, were delivered between 1980 and 1981 (before construction works on the underground section even began!) and were put in service on the Helwan Line to replace the dilapdated 5500 Series, wich were the fifteen original Dutch Allan-built 3-car trains with siemens electrical equipment introduced between 1955 and 1956 for the Helwan Line’s electrification.

With the opening of the underground section of Line 1, on the 26th of September 1987, the 5000 Series trains started to run from Helwan to Mubarak station (currently Al Shohadaa station). In 1986 another order for forty-two more 3-car sets was placed to Alsthom and ANF, with final assembly to carried out at the SEMAF (an egyptian rolling stock manufacturer) plant in Helwan. These 42 additional trains were delivered in 1989 for the electrification of the northern section to El Marg and the commencment of Line 1’s full service, on the 5th of April 1989, running seamlessly between El Marg and Helwan.

An order of thirty additional 3-car sets, to increase the line’s capacity, was placed in 1992, this time not to Alsthom and ANF, but to a Japanese consortium, formed by Mitsubishi, Kinki Sharyo and Toshiba, with final assembly by SEMAF in egypt. Depsite being made by Japanese companies instead of the original french manufacturers, this later batch of 5000 Series trains was essentially identical to the original trains, including the same technical equipment (including the distinctively french-style driving desks). The only notable difference is that the Japanese-built trains are fitted with a roller-blind destination and train service number indicator, unlike the french-built trains.

A further order for nine 3-car sets was made in 1998 (for the 1999 one-stop northwards exension of the line, from El Marg to New El Marg) and a final order for seven additional 3-car sets was placed in 2001.

In 2007, Alstom was awarded a contract from the Cairo Metro to refurbish the fifty-two 1st batch trains it had delivered between 1980 and 1981. The first refurbished 5000 Series set was returned to the Cairo Metro in January 2011; modifications included a general repairation of the bodyshell and other technical equipment and a light renovation of the interiors. Rather than a “true” refurbishment, this was more a process of “extra maintainance”, with the only sizeable modification made being the new coat of paint and livery given to the trains.

Currently, all 140 3-car sets delivered between 1980 and 2001 should be in service, formed as fourty-six 9-car sets (plus two 3-car sets as spares), either in a refurbished or unrefurbished form.

Starting from 2015 the 5000 Series has been supplemented by twenty 9-car 1000 Series sets built in South Korea by Hyundai Rotem, however there are no plans to fully replace the 5000 Series yet.