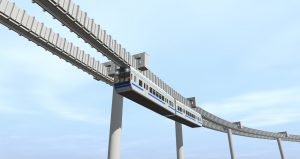 The 1000 Series is Chiba Urban Monorail’s first train type, having been introduced when the first section of the system opened in 1988.

Based on the 400 Series of the Shonan Monorail (the only other SAFEGE-type monorail system in Japan), a train that had been built in 1980 by Mitsubishi (the SAFEGE-license holder) to test most of the technical improvements and solutions that were to be applied on the Chiba Monorail, an initial batch of 8 2-car sets was manufactured by Mitsubishi and delivered to Chiba in early 1988 in time for the opening of the first section of the monorail (part of the current Line 2), between Chishirodai and Sports Center (plus the network’s depot near Doubutsukoen station) on the 28th of March.

The 1000 Series shares most of the technical components with the Shonan Monorail 400 Series, included and not limited to the bogeys (a proprietary SAFEGE design built under license) and the traction control system, a resistor camshaft contactor control (an augurably odd choice for 1988, as choppers were already widespread and inverters were becoming increasingly commonplace…)
The overall design was however slightly updated – the cars were longer than the Shonan Monorail ones’ (14,8m vs 13m) and had wider, more modern double-leaf door and an overall more pleasant and modern design.

In 1991 another batch of four 2-car trains was delivered for the opening of the extension from Sports-Center to Chiba Station. These were followed in 1993 by five more 2-car sets, built for the southward extension from Chiba to Chibaminato, wich opened in 1995, and in 1999 the final three 2-car sets for the opening of the branch line between Chiba and Kenchomae (the current Line 1). Depsite the 11-year-long production run, differences between the various batches are rather minimal, with all trains sharing the same bodyshell, livery, interior fittings, equipment and so on…

From 1999 onwards, the service life of the 1000 Series has been rather unremarkable and uneventful. The first meaningful change for these trains arrived in the early 2010s: with the first-batch trains rapidly ageing, a replacement was introduced in the form of the 0 Series, introduced in 2012 and invariably manufactured by Mitsubishi.
Chiba Urban Monorail initially planned to replace all the 1000 Series trains in service with the 0 Series, however it had to revise it’s plans almost immediately due to the absolutely dire state of the company finances. Instead, the more pragmatic approach was taken, with the 0 Series replacing gradually only the most worn-out sets. Consequently, the 1st batch trains were all retired from service by 2015 and the 2nd batch trains followed a few years later.

Currently, only eight 1000 Series trains (of the 3rd and 4th batches) are in service, with Chiba Urban Monorail planning for a definitive replacement with 0 Series trains by 2028.
Otherwise, in day-to-day operations the 1000 Series is used interchangeably with the 0 Series on both Chiba Monorail Lines’: Line 1 from Chibaminato to Kenchomae and Line 2 from Chibaminato to Chishirodai. Since the elimination of 4-car trains during rush hours, all trains on the network (either the 1000 or 0 Series) operate invariably as 2-car sets.

Luckily, several 1000 Series cars have already been preserved: car No.1001 is on display inside Chiba Monorail’s Depot, cars 1003 and 1004 (the second 1st-batch train) are on display at the delightful Poppo No Oka museum in Isumi (not too far from Chiba), cars 1002 and 1015 are on display at the Nakagawa Railway Preservation Society museum in Tochigi prefecture, the fifth 1st-batch train (cars 1009 and 1010) were sold to a private individual and are now being used as a café in Yaizu city (Shizuoka prefecture) and cars 1011 and 1012 (the 6th 1st-batch train) were sold in 2015 for a grand total of 350 000 yen to a kindergarten in Chiba’s Maihama ward and the Showa-no-Mori Museum in Matsudo City (again, not too far from Chiba).

As mentioned earlier – the package also includes a track kit for SAFEGE-type monorails, so you now can have suspended monorails on your routes as well!