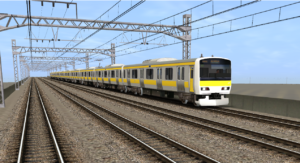 By the mid-2010s, E231-500 Series trains had became a familiar sight for Tokyoites, being an icon of the Yamanote Line in particular and for Japanese railways in general.

Depsite this, and the fact that some of the trains were less than 10 years old, JR East decided to replace the entire Yamanote Line fleet in time for the 2020 Olympics, yet the E231-500s were not to be scrapped: they were to be reassigned to the Chuo-Sobu Line, igniting a “chain-reaction replacement program” wich had the final goal of getting rid of most JNR-designed stock still in operation on JR East’s major lines in the Greater Tokyo Area.

The design for the new train, the E235 Series, was finalized in 2014, with production to be starting in 2015. Around the same time, a single set, No.520 was shortened from 11 to 10 cars, refurbished and transferred to the Chuo-Sobu line to test if it was a viable solution. The tests were highly successful, and it entered service on the 1st of December 2014.

As the E235 Series prototype set was introduced on the Yamanote Line in 2016, another E231-500 Series set (this time No.540) was transferred too on the Chuo-Sobu Line, followed by the rest of the fleet starting from 2017, as they were replaced by full-production E235 Series trains.

All the 52 former Yamanote Line E231-500 Series sets have been refurbished and are now running on the Chuo-Sobu Line.

Bonus picture: an example of the “Chain-Replacement” system currently employed by JR East. 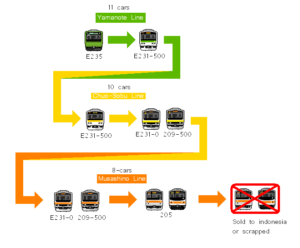