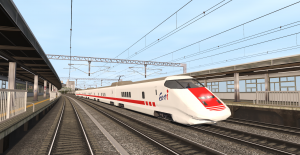 For some consists, you’ll need to install (or have installed) also Hirochi’s E2 Series Shinkansen as well (avaible on the DLS).

The E926 Series was introduced in the early 2000s as a replacement for the ageing and obsolete 925 Series inspection trains on the Tohoku-Joetsu-Nagano Shinkansen network. The two 925 Series sets had been manufactured in the late 1970s as prototypes for the 200 Series (and as such, even predated the opening of the Tohoku Shinkansen itself) and were converted into dedicated inspection trains in the early 1980s.

While they had performed their duties well for nearly 20 years, by the late 1990s the two sets were becoming increasingly obsolete and inadequate, particularily due to their lower top speed compared to the 275Km/h of the recenty-introduced E3 Series. Furthemore, as they had been built with the “standard” Shinkansen loading gauge, they were unable to operate on the newly-opened Akita and Yamagata “Mini Shinkansen” lines, wich depsite having been regauged to the 1435mm standard gauge of Shinkansen lines, still retained the narrow loading gauge of the 1067mm gauge conventional lines. As such, these two “Mini-Shinkansen” lines had to rely on a KuMoYa 743 Series inspection railcar, wich was an old KuMoYuNi 143 mail-parcels railcar regauged to standard gauge, converted to 20Kv 50Hz AC electrification and fitted with the necessary inspection equipment. However, by the late 1990s KuMoYa 743 was also aging rapidly, and as such, JR East decided to replace all three inspection trains with a new “amphibious” inspection train able to run seamlessly on both “standard” and “mini” Shinkansen lines. As such, the new train had to inevitably “take the form” of a mini-Shinkansen train.

Classified as the “E926 Series” and nicknamed “East-i” (where “East” is obviously JR East and “i” means “integrated”, “intelligent” and “inspection”), JR East’s new Shinkansen inspection train entered service in 2001. Derived from the succesful E3 Series Shinkansen, wich had been built (and at the time was still being built) in considerable quantities for both the Akita and Yamagata Shinkansen, the East-i set was manufactured by Tokyu Car Co. (one of the two original manufacturers of the E3 Series, the other being Kawasaki Heavy Industries) and was formed in a 6-car set, each with each car having a specific purpose: Cars 1, 2 and 6 inspect the track-train signal and communication equipment (such as the ATC system), Car 3 inspect the track geometry (such as gauge, profile and so on), Cars 4 and 5 inspect the catenary.

The East-i is currently assigned at JR East’s Shinkansen General Vehicle Center in Rifu Town, near Sendai, and it’s cleared for operation on all of JR East’s Shinkansen lines, including the Tohoku, Joetsu, Nagano/Hokuriku (including JR West’s portion of the line), Akita, Yamagata and since 2016 also the Hokkaido Shinkansen as well. Inspections on the Tohoku, Joetsu, Nagano/Hokuriku and Hokkaido Shinkansen are carried out evry 10 days, while inspections on the Akita and Yamagata Shinkansen (due to the lower speeds and less intense traffic) are carried out four times per year.

Beisdes the six cars of the standard East-i set, there’s a seventh one officially classified into the E926 Series: car E926-13.
This car is equivalent, nearly identical, to car 3 (E926-3) of the “normal” East-i set, and it’s used when the full inspection set is unavaible (most often when the East-i is undergoing routine maintainance): in this case, car E926-13 will be sandwitched in a dedicated E2 Series Shinkansen formation (8-car N21 formation) replacing the “normal” car 2 (and thus making for an odd-looking formation). When doing inspection runs with car E926-13, E2 Series set N21 is considered a full inspection train, and as such doesn’t carry any fare-paying passengers.

Currently, depsite having passed the 20 year mark, there aren’t any plans to replace the East-i yet.