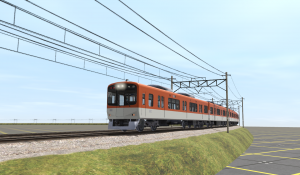 In order for this train to work, you’ll need to download and install first the original Hanshin 9300 Series made by Keimei, avaible on the DLS.

The 9300 Series was introduced by Hanshin Railway in 2001 to replace the older 3000 Series wich was an amalgamae of several different serieses built between the early and the mid-1960s and reformed as the “3000 Series” in 1983. In fact, by the late 1990s, due to the extremly intense nature of services on the Hanshin Line, the 3000 Series began to show signs of fatigue and wear, wich progressively worsened with time.

Furthemore, in 1998, Hanshin Railway and San’yo Railway began to run express trough-services between them (via the Kobe Kosoku Line), with San’yo Railway using it’s brand-new 5000 and 5300 Serieses, wich had a semi-cross-seating interior layout arrangment, a choice made to compete with JR West’s Shin-Kaisoku services, operated by the 221 Series and the brand-new 223 Series.Hanshin instead, as it did not have any semi-cross-seating trains, on such services had to use the 8000 and 9000 Serieses, wich had longitudinal seating.

Longitudinal seating isn’t a problem on commuter services, but when it comes to rapid and express services, it often leaves somehting to be desired.
Not only that, but the afromentioned 3000 Series (wich also had all-longitudinal-seating) wasn’t even permitted to run trough-services as it lacked the necessary ATS equipment compatible with San’yo Railway’s one. Therefore, services run by the 3000 Series had to terminate at Kosoku Kobe Station instead of continuing onto the San’yo Main Line.

As such, time was ripe for Hanshin Railway to introduce a new electric multiple unit design.

Designated as the “9300 Series”, the new trains were based on the previous 9000 Series design, but with several cosmetic and technical improvements. Obiviously, they were also fitted with semi-cross-seating.
While it maintained the general layout and dimensions of previous Hanshin Railway stock, the 9300 Series was new under many aspects, starting from the livery: instead of Hanshin’s classical red-and-cream livery, wich was sinonymous with Hanshin’s rapid services (wich are in fact nicknamed “Aka do-sha”: “red cars”) the new 9300 Series was adorned by a new striking “Presto Orange” (where “Presto” in italian stands for “quick”) and “Silky Beige” livery, wich was also later applied to the earlier 8000 Series.
To speed-up passenger boarding and alighting, the doors were also widened from Hanshin’s standard 1300mm to 1400mm.

Manufactured at Hanshin Railway’s own Mukogawa Workshops, three 9300 Series 6-car sets were built between 2001 and 2002, with the first set entering service on the 10th of March 2001 and the last one on 14th of March 2003, on the same day that the last remaining 3000 Series set made it’s final run.

As of today, the three 9300 Series sets are still in operation on rapid services on both the Hanshin and the San’yo main lines. None of the three sets has undergone any refurbishment program, meaning that their state is the same one as they were introduced twenty years ago. Obiviously, there isn’t any replacement planned yet, and it’s very well probable that the 9300 Series will continue running for another 20 or more years.

Trivia#1
The choice of the “Presto Orange” livery initially sparked a bit of controversy within the company’s top brass: Hansin Railway notoriously owns the Hanshin Tigers professional baseball team, but the tonality of the orange used in the new trains’ livery appeared to be too close to the team’s arch-rival’s one instead: the Yomiuri Giants.

Depsite opposition within the company, the livery eventually was not modified, and was even subsequently applied also to the older 8000 Series.

The question resurfaced in 2017 at a shareholders meeting, when refurbishment plans for the 9000 Series were being discussed. To avoid repeating “previous mistakes”, Hanshin Railway indeed made sure that the 9000 Series’ new livery orange tonality was identical to the one used by the Hanshin Tigers.

Trivia#2
The 9300 Series sets were the last trains manufactured by Hanshin’s Mukogawa Workshops before their closure in 2002.

Trivia#3
The 9300 Series was Hanshin’s first non-fully-longitudinal-seating train since the introduction of the 3011 Series of 1954.