In order for this reskin to work, you’ll need to download and install first the original Hanshin 1000 Series package made by Keimei and avaible on the DLS.

The 1000 Series was introduced in 2006 by Hanshin Railway to operate rapid and express trough-services with the Kintetsu Main Line via the newly-opened Hanshin Namba Line.

Now, besides the Main Line and the short shuttle-like Mukogawa Line, Hanshin Railway did also own a third line, the Nishi-Osaka Line, wich branched off at Amagasaki and ran to Nishikujo on the Osaka Loop Line.
This line was initially opened in 1928 as the Denpo Line, and was intended to be part of a planned “Hanshin Second Line” wich would have acted as a parallel bypass for the Main Line, however World War 2 put an end to these plans, wich were eventually abandoned shortly after.

With extension plans shelved, the Denpo Line was renamed as the “Nishi-Osaka Line” in 1964, with services now shuttling back and forth from Amagasaki to Nishikujo. Thus, until relatively recent, the role of the Nishi-Osaka Line remained a quite secondary one within the Hanshin Railway network.

Eventually, a beam of hope for the line came in the late 60s, with Kintetsu Railway opening it’s Namba Line, an underground extension of the Nara Line, roughly paralleling the subway’s Sennichimae Line, carrying Nara Line services further into the Osaka city center, with a newly-built terminus at Namba. As soon as the Kintetsu Namba Line opened in 1970, Hanshin Railway started drawing up plans for an eventual link line that would connect Kintetsu Namba station with Nishikujo Station on the Nishi-Osaka Line, enabling Kintetsu and Hanshin railway to run reciprocal trough-services.
However, due to financial and land acquisition issues, togheter with Hanshin Railway focusing more on improvments on the vital Main Line, plans for the link line were eventually shelved, sitting in a drawer taking dust until the late 1990s, when they were “re-discovered” as part of Hanshin Railway’s reconstruction efforts after the 1995 Great Hanshin Earthquake, wich took a hefty toll on the railway.

After being obviously updated, the plans came to fruition in 2001, when construction was started on the new link line, now named as the “Hanshin Namba Line”.
While the existing section of the line, between Amagasaki and Nishikujo remained propery of Hanshin Railway, the “link” section between Nishikujo and Kintetsu-Namba was being built and owned by the “Nishi-Osaka Rapid Railway Co.”, a consortium company made up of Hanshin Railway and the Osaka Municipal and Prefectural governments.

With the construction of the line well underway, Hanshin Railway had to purchase suitable rolling stock for the new line, as the older trains operating on the line (the 5001 anf 5131/5331 Serieses) simply couldn’t do.

Built by Kinki Sharyo (a manufacturer owned by Kintetsu Railway, among other things), the first 6-car set of the new 1000 Series was delivered to Hanshin Railway in October 2006, followed suit by two 2-car sets.
Extensively based on the earlier 9000 Series, wich was introduced in 1996 to replace all the rolling stock damaged by the earthquake, the new 1000 Series followed Kintetsu Railway’s formation practices, and as such was formed in 6 or 2 car sets, wich could be used to form 8 or even 10-car sets (the maximium capacity of both Hanshin and Kintetsu lines).

The train’s bodyshell was made of stainless steel, with “Hanshin Tiger Orange” (officially “Vivace Orange”, where “Vivace” is Italian for “Lively”) accents on the front and the doors.

Technically-wise, it used a very up-to date IGBT-VVVF inverter manufactured by Mitsubishi Electric, identical to the one on 9300 Series trains, so to contain maintainance costs. Naturally, the 1000 Series was also equipped with saftey systems compatible with the three different ATS types used by Hanshin, Kintetsu and San’yo Railway as well, enabling the 1000 Series to run trough-services between all three companies.

Like the first set, the whole fleet was manufactured by Kinki Sharyo and was delivered between October 2006 and 2009, with additional sets being delivered in 2011, bringing the total to 96 cars: thirteen 6-car sets and nine 2-car sets.

To fill the “gap” left by the retirement of the older stock, the 9000 Series fleet was moved from the Hanshin Main Line, refurbished, adapted for trough-services with Kintetsu Railway (wich, among other things, included a new livery based on the 1000 Series’ one) and re-introduced in service, thus leaving the 9000 and 1000 Serieses as the only trains operating on the Hanshin Namba Line.

As of today, the 1000 Series is still in service and is a common sight on both the Hanshin Main Line, the Hanshin Namba Line and Kintetsu’s Nara and Namba Lines as well. They do also run some services on the San’yo Railway, but these are far less common, as Hanshin Railway already has plenty of stock compatible with the latter’s network.

According to Hansin Railway, the 1000 Series was designated as such because it was the first train designed after the railway’s centenary (in 2005).

The 1000 Series was Hanshin Railway’s first Kinki Sharyo-made train since the 1001 Series of 1936, altough the company also acted as a design consultant for Hanshin’s 8000 Series, built between 1984 and 1996 by the railway’s Mukogawa Workshops. 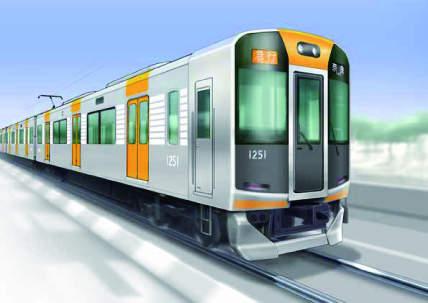