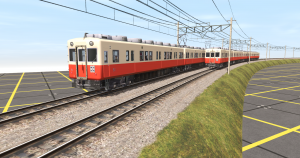 Three 4-car sets manufactured by the Mukogawa Workshops between 1974 and 1977. Originally intended to run on an extension that would have connected the Hanshin Nishi-Osaka Line to Kintetsu’s Namba Line (a scheme largely identical to today’s Hanshin Namba Line), due to various setbacks with the project, they were reassigned to the Hanshin Main Line, where they would have replaced the last remaining single-leaf-doors, non-air-conditioned trains running express services.