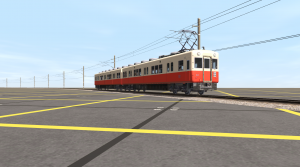 This is a single 2-car set that was formed in 1986 from surplus 3801/3901 Series cars. It was intended for services on the short Mukogawa Line, where it replaced an old 3301 Series set. In 2020 it was itself replaced by refurbished and shortened 9000 Series trains now surplus for Hanshin Main Line requirements.

While car 7990 was scrapped in 2020, it’s twin, car 7890 was handed over by Hanshin to the Urban Renewal agency (formerly the Urban Developemnt Bureau), an agency of the Japanese government responsible for overseeing national urban planning and, among other things, managing the country’s extensive “Danchi” (pubblicly-owned housing) apartments. Car 7890 will be in-fact used as a communal space in a Danchi complex in Mukogawa, not too far from the actual Mukogawa Line tracks where the train used to run.