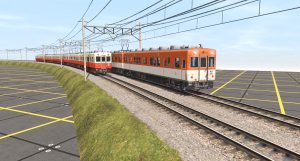 By the mid-1980s, Hanshin Railway had several tens of different, but largely similar-looking, serieses of trains in service on both local and express duties. As such, Hanshin Railway set forth to finally build a standardized train, wich initially was intended for express service, with a local services derivative (wich would become the 5500 Series) to be built at a later date. The design of the new trains, classified as the “8000 Series” was finalized in 1983, and in 1984 the first prototype 6-car set n°8201 entered service.

As with most of Hanshin stock at the time, the 8000 Series was manufactured by the railway’s Mukogawa Workshop. The 8000 prototype set looked very similar to contemporary Hanshin stock, with the two separated top-mounted headlights.
Taking the vastly positivie past experiences with the 5131/5331 Series and especially the 7001/7101 Series, the new 8000 Series trains were equipped with an energy-saving, smooth-accellerating armature chopper control, a far cry from older resistor-control trains.

Follwing the successful testing of the prototype set, full-production of the 8000 Series eventually began in 1985. For full-production trains, however, the design was changed to a more modern-looking front with large windows and twin top-mounted headlights, a style that has been a staple of Hanshin Railway ever since.
When production of the 8000 Series stopped in 1996, Hanshin railway had a fleet of twenty-one 6-car sets (126 cars plus three cars built as replacement for those damaged in the 1995 Hanshin Eartquake) at it’s disposal.

In 2009, with the refurbishment of the full-production 8000 Series sets, the prototype set was refurbished as well, repainted in the white and orange livery derived from the more recent 9300 Series.
As of today the 8000 Series is still a mainstay of rapid and express services on the Hanshin Main Line, with prototype set 8201 still running in regular service along it’s “full-production” siblings.