Requested and made in collaboration with Leoluchvibritannia. 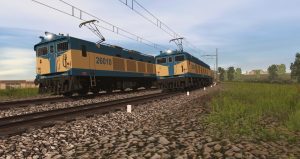 By the mid-1980s, the mainstay of Indian Railways’ electric traction were the WAM-4 and WAG-5 classes, Co-Co wheel arrangment locomotives derived from the 50c/s group (Alsthom, Siemens, AEG and other well-established european manufacturers) WAM-1 and WAG-1 designs.

However, both classes were still in production at the time depsite being an augurably obsolete design, dating mostly back to the original 50c/s group designs of the early 1960s, at the infancy of India’s 25Kv AC 50Hz electrification system. Elsewhere instead, railway traction technology had evolved greatly in the past two decades: with the advent of electronics, primarily trough the introduction of the thrystor chopper control, in Japan and in various european countries, it was now possible to build new electric locomotives that had far more power for same weight compared to existing “traditional” resistor and transformer-tap type locomotives.

The Indian Railways were well aware of this, and thus sought to introduce a more up-to-date design, with the hope, among other things, to fully replace the redivive steam locomotives still in service at the time as electrification grew.

Two well-established manufacturers were select for the new electric locomotives, to be classified as WAG-6: the Swedish ASEA, and the Japanese Hitachi.

Interestingly, however, the two companies weren’t intended to work togheter, but rather to present their own independent version of the design, for wich IR gave only broad indications: six axles, 6000hp, thyristor chopper control and the ability to work in environments with a temperature up to 50°C. The superior one between the two was to be eventually choosen for mass-production, likely at a domestic manufacturer trough a collaboration or the purchase of a production license.

Answering to the tender, ASEA proposed a Bo-Bo-Bo locomotive, while Hitachi proposed both a Bo-Bo-Bo locomotive (closer to Japanese practice) as well as a Co-Co design, like existing Indian electric locomotives. Satistified with the proposals, IR proceeded to order six locos from ASEA and twelve from Hitachi: six Bo-Bo-Bo ones and six Co-Co ones.

ASEA naturally opted to base their version of the WAG-6 on their extremely successful Rc-family of locomotives, wich had seen widespread use in Sweden, and had been also exported abroad, to Iran, Austria (forming the basis for the successful OBB 1044 class) and the United States, where they turned around the fortunes of Amtrak’s north-east corridor as the AEM-7 class.

Hitachi instead, based it’s version on their well-appreciated export designs, such as the 3Kv DC electric locomotives that the company had been manufacturing for Morocco’s ONCF since the 1970s, and also drew some inspiration for the export locomotives other Japanese manufacturers had been producing, among those Mitsubishi Electric’s Class 251 locomotives for the Spanish RENFE. Finally, part of the design (primarily in regards to the bodyshell and arrangment of the internal equipment) was also based on the various electric locomotives that the company had delivered for the now newly-privatized JNR, such as the EF64 and EF81 classes.

Both the ASEA and the two Hitachi versions of the WAG-6 class performed extremely well, proving themselves quite reliable (if anything, the Hitachi ones a little bit more than the ASEA ones) and earned quite a good reputation with drivers, as they were rather comfortable and overall a true step up from previous designs.

However, being a cutting-edge imported product, the pricetag was also quite hefty, meaning that Indian Railways was not in a position to place large orders and domestic license-production was also a still far-fetched idea, as most of the technology base necessary for a mass-production of these advanced locomotives was simply lacking in almost all domestic manufacturers.

In the end, IR postponed and postponed again the purchase of a new batch of either ASEA or Hitachi-designed WAG-6s, and ultimately abandoned all plan to do so by the end of the 1980s, opting instead to continue ordering and purchasing the slightly less advanced, but equally slightly cheaper domestic-made WAG-5, ironically the locomotives to wich the WAG-6 Class was intended as a successor. The place intended for a mass-order WAG-6 would be instead filled out by the domestically-designed WAG-7 Class, introduced in 1990 by CLW, an updated version of the WAG-5 with a power output of 5350HP, of wich nearly two-thousand units were manufactured from 1990 to 2015 (!).

The WAG-6 class, in either version, remained the most powerful class of Indian locomotives until 1995, when the “wall” of the 6000HP was broken by the three-phase inverter-controlled WAG-9 class, designed by CLW with technical assistance from ABB, the successor of the same ASEA that built the WAG-6As less than a decade earlier, thus making the WAG-9 a sort of “spiritual successor” to the WAG-6As.

Returning to Visakhapatnam, all 18 WAG-6 Class locomotives remained in service well after Indian Railways made clear to the manufacturers that there wouldn’t be any follow-up orders. As the already minute spare parts stockpile ran dry, Visakhapatnam Depot was forced to remove some units from service to act as spare parts donors to keep the other members in the class in service, a task that became increasingly difficult over time.

With most units in the class (from either manufactuer) unable to undergo Indian Railways’ POH (Periodic OverHaul) program, failures became increasingly common. Replaced by domesticly-built surrogates with plenty of spare parts and less demanding maintainace, all eighteen WAG-6 Class locomotives were withdrawn from regular services between 1999 and 2000, being retained as spare locomotives. This too came to an end around late 2002, as reliability problems worsened, it was decided to completely retire the class from mainline service.

As a last-ditch effort, spare parts were urgently sourced from both ABB and Hitachi in 2003 and saw a brief return of both versions of the WAG-6 Class to mainline services, altough always as spare locomotives. The finely-tuned ASEA WAG-6As managed to remain in service until between 2012 and 2014, with the last surviving units being definitely retired in 2015, after it basically became impossible to keep them running.

Similarily, the Hitachi units kept failling one after the other, depsite their rather “mistreatment-tolerant” construction, being retired from mainline duties by the early 2010s. All six WAG-6Bs were retired, but four WAG-6Cs were retained, and are currently in halphazard service (likely with spare parts courtesy of their tri-Bo brothers) for shunting and departmental duties in and around Visakhapatnam. Unfortunately, these aren’t likely to last any longer and will be definitively retired soon.

Luckily however, all retired WAG-6 units from either manufacturers are still intact, stored inside Visakhapatnam depot, and a locomotive from each version (A, B and C) has been selected for preservation.