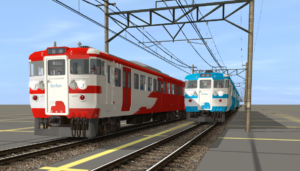 Ever since it’s opening in 1961, the Izukyuko Railway had ran only 100 and 1000 Series trains on local services, wich were built between 1961 and 1972. Depsite being good-looking and very comfortable, by the year 2000, they were old (especially the 100 Series, wich neared 40 years of age), outdated, but most importantly, their steel bodies suffered from a high corrosion damage caused by the sea’s salt water (the Izukyuko Line runs for the majority of it’s route very close to the coast).

By 2000, Izukyuko was planning a replacement, and as it is a Tokyu Group company, it had planned to replace the 100s and the 1000s with to-be retired Tokyu 8000s, wich at the time were in service on the Toyoko Line.

Depsite the intention, Izukyu couldn’t acquire the 8000s, as they were still in use with Tokyu Railway, and with the 100s and 1000s’ situation getting worse by the day, Izukyu quickly needed a stop-gap mesaure.

The solution came from JR East, wich at the time was replacing it’s Matsumoto depot 115 Series with the more modern E127 Series.

Izukyuko railway’s drivers and conductors were already well acquainted with JR East’s nearly-identical 113 Series, wich operated trough-services between the JR Ito Line and the Izukyuko Line, and as such, did not need to be retrained for different trains. Furthemore, the Matsumoto depot 115s were equipped with special brakes for continuously-sloped lines, as it is the case with the Izukyuko Line.

Izukyuko immediately bought eleven 3-car sets, wich were transferred and delivered to the Izu peninsula between 2000 and 2003. All trains were repainted into a new livery, wich was white with colored diagonal and horizontal bands: light blue for sets F1 to F8 and red for sets F9 to F11.

Finally, in 2005, Tokyu’s 8000 Series started to be replaced by the 5050 Series, being retired and put up for sale. Izukyuko immediately started to buy the retired stainless-steel cars, and on the first of April 2005, the first 8000 Series (Izukyu retained Tokyu’s original classification) set entered service.

Izukyuko continued to buy retired Tokyu 8000 Series sets, reforming them into -2 and -4-car sets and repainting them into a light blue livery. Ultimately, by 2008, Izukyuko had bought a total of seven 4-car sets and six 2-car sets, wich were later reformed into a uniform fleet of fifteen 3-car sets.

With the large influx of ex-Tokyu stock, the 200 Series fleet progressively thinned, and in 2007, the “light blue” formations (F1 to F8) were retired, followed a year later by the “red” F9 to F11 formations. On the 14th of December 2008, the last remaining 200 Series set made it’s final run.