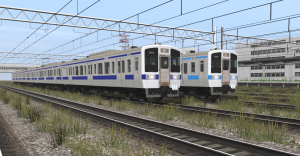 The JNR 415 Series pack is required for some consists.

Now, the 415-1500 Series was introduced in 1986, just before the privatization of JNR, to supplement the existing “conventional steel” 415 Series trains, wich were derived from the DC-only 113 Series’ design.
Unlike their predecessors however, the new 415-1500 Series was based on the 211 Series, then JNR’s newest suburban train design, and the successor of the 113 Series itself.

To contain costs, the 415-1500 Series was designed to be as similar as possible to the 211 Series, using the same exact stainless steel bodyshell and FRP front mask, bogeys, doors, air conditioning units and so on. The only notable external differences between the 211 Series and the 415-1500 Series was the presence on the latter of a distinctive cab radio antennae on the roof and of an array of three jumper cables on the front to operate in multiple unit control with “conventional steel” 415 Series sets.

The 415-1500 Series had indeed been designed around MU-compatibility with the older, heavier, 415 Series sets and as such, they had their performance tweaked to match the one of the 415-500 and 415-700 Series’ one, then the lastest batches of conventional steel 415 Series sets built (in 1981 and 1984 respectively). The traction equipment, a resistor control coupled with DC motors and a rectifier (when running under AC catenary), was also virtually unchanged from the older 415 Serieses’ one.

Therefore, depsite the radically different exterior looks, the 415-1500 Series remained technically similar to the older sets, reason why JNR decided to classify them as a part of the 415 Series family rather than with an entirely new designation (and also because all the 41X series numbers, used by JNR to indicate AC/DC multivoltage suburban trains, had already been taken*).

JNR initially ordered a fleet of twenty-one 4-car sets (a total of 84 cars), maufactured jointly by Nippon Sharyo, Kawasaki Heavy Industries, Hitachi and Tokyu Car Co., with the first deliveries to be made in 1986.

Originally, all 21 sets were to be assigned to Katsuta Depot (in Hitachinaka city) for services on the Joban Line out of Ueno, but soon JNR modified it’s plans, with eight 4-car sets being allocated to Minami-Fukuoka depot in Kyushu, for Kagoshima Line services between Mojiko or Shimonoseki and Nagasaki or Haiki.

By the time of JNR’s privatization, on the 1st of April 1987, there were 85 415-1500 Series cars in service: twenty-one 4-car sets plus an additional trailer car, SaHa 411-1700.
This unique car had been introduced togheter with the rest of the 415-1500 Series in 1986: that year, with a general reorganization of “conventional steel” 415 Serieses’ formations, JNR found out that one trailer car was missing to form a 7-car set. To solve the problem, Nippon Sharyo was contracted to make an additional trailer car based on the already-in production 415-1500 Series. Designated as SaHa 411-1701, it was the only stainless steel 415 Series car to be fitted with semi-cross seating. Upon it’s entrance in service, SaHa 411-1701 was sandwitched at the dead center of a conventional steel 415 Series formation (three cars on one side and three on the other).

After the privatization, the newly formed JR East and JR Kyushu inherited the 415-1500 Series sets allocated to their respective areas: JR East got the thirteen Joban Line sets plus SaHa 411-1701, while JR Kyushu got the eight sets assigned to Minami-Fukuoka depot.