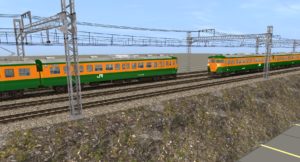 At the time, JR Central was still recieving brand-new 211 Series sets, but the 113 and 115 Serieses still ran the bulk of commuter and suburban services in the Nagoya Area, togheter with a few 103 Series sets for the most crowded lines.

With a general rolling stock reorganisation in 1988, the small fleet of 113 Series trains was reassigned to Tokaido Line local services on the Atami to Nagoya section, while the much larger fleet of 115 Series trains was split between Nagoya Suburban Services (on the Chuo and Tokaido Lines) and local services on the rural Minobu, Gotemba and Ida Lines.

In 1989 JR Central introduced it’s first own suburban train design: the 311 Series, wich was based on the 211 Series and it was intended to replace 115 Series trains from Nagoya Suburban Services.

Unfortunately, the 311 Series was already obsolete by the time it entered service, as it was closely based, maybe too closely based, on the JNR 211 Series, wich, depsite being confortable, reliable and economical to manufacture and run, was intended to bea “cost-cutting” mesaure, having been concieved during a period of harsh financial constraints for JNR.

By the late 1990s, the obsolescence of the 211 and 311 Serieses began to show, and with the 113 and 115 Serieses even more old and obsolete, JR Central had to design an entirely new train.

Introduced in 1999, the 313 Series was JR Central’s first own suburban train design not based on existing serieses, with the first sets entering service in mid-1999 on suburban services around Nagoya, on the Chuo and Tokaido Main Lines, supplementing the 311 Series and displacing the 115s to local and rural lines.

Briefly after it’s introduction, JR Central found out that the 313 Series was extremely versatile, as it had a high accelleration (ideal for commuter services) and a high maximium speed, it could’ve been suited for almost all services. The three doors per car also did not pose any significant problem on the most crowded lines, as railway ridership is far lower in Nagoya than in other Japanese cities such as Tokyo or Osaka.

As such, JR Central immediately placed huge orders after another, with the 313 Series fleet getting bigger by the year.

On the 10th of October 2006 the 115 Series trains still in service on the Nagoya to Shizuoka portion of the Tokaido Main Line were retired, replaced by displaced 211 Series sets, and one year later the last 113 Series sets were also retired, on the 13th of March 2007.

Finally, on the 17th of March, JR Central’s last 115 Series train was retired from Ida and Minobu Line service. All of them were replaced by 313 Series trains.

Due to it’s overall similar appearance and versatility, the 313 Series can be considered the most direct “spiritual successor” of the 113 and 115 Series.