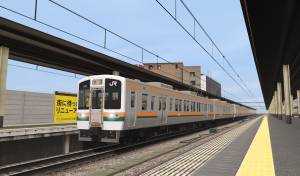 However, depsite being the most famous user of 213 Series trains, JR West wasn’t the only one – JR Central did also have it’s own fleet of 213 Series trains. These were introduced between 1989 and 1991 for local services on the electrified Kansai Main Line section between Nagoya and Kameyama. As mentioned with the 211 Series, the Nagoya area had long been neglected by JNR, to the point that up until privatization, to reach the Yokkaichi area from Nagoya by train meant by default taking the Kintetsu Nagoya Line.

To win back customers on the Kansai Main Line after the privatization, JR Central introduced it’s own derivative of the 213 Series, classified as the 213-5000 Series. The design of these units was nearly identical to JR West’s 213-0 Series but fetaured many improvements found on JR Central’s 211-5000 Series as well, such as the two separate air conditioning units. A total of 14 2-car sets (for a total of 28 cars) were manufactured by Nippon Sharyo between 1989 and 1991.

The 213-5000 Series entered service on both local and rapid services on the Kansai Main Line in 1989, replacing the older 165 Series. The whole fleet was assigned from the start to JR Central’s Ogaki Depot, and while services on the Kansai Line were the “main duty” of the fleet, 213-5000 Series trains could be seen running local trains on the Tokaido Main Line (between Ogaki and Okazaki stations) and both local and rapid services on the Chuo Main Line, taking advantage of the fact that the 213-5000 Series is compatible, and can be operated in multiple-unit, not only with the technically similar 211-0, 211-5000 and 211-6000 Serieses, but also with more modern JR Central stock such as the 311 Series and even the 313 Series.

As of today, the whole 213-5000 Series fleet is still in service on the Ida Line, being used interchangeably with 313-3000 Series sets. Plans however have been made for their replacement in the form of the 315 Series, JR Central’s new commuter train, wich is scheduled to be introduced from 2021 onwards.