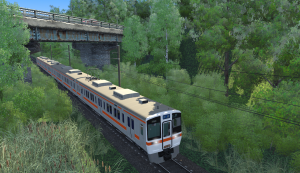 The 311 Series was introduced in 1989 as the first new suburban train design of the newly-formed JR Central. These new trains were specifically intended to be used on newly-introduced rapid services on the Tokaido Line from Nagoya to Hamamatsu, Toyohashi, Ogaki and Maibara.

Derived directly from the standard 211 Series design of the defunct national railways, the 311 Series was a much enhanced and improved version of it’s predecessor, and as such shared both the basic bodyshell concept with an FRP front mask, wich however had been redesigned to give the trains a more modern look, and many technical components as well, such as the bogeys and traction motors. The bodyshell overall design was actually identical to the one of the 211 Series, however it had been extensively “re-arranged” with the central passenger compartments (between the central and external doors) having been expanded at the expense of the “end-of-car” ones (pushing the external doors further apart from the central ones in the process).

Due to their nature as trains intended for rapid services, the maximium speed of the 311 Series was also increased, topping at 120Km/h, making it one of the first non-limited express 120Km/h-capable narrow gauge trains in Japan.

Finally, the exterior livery was also changed compared to the 211 Series, with JR Central dropping the iconic “Shonan” green and orange colors in favour of a solid orange side band, with the tonality being the same as JR Central’s logo.

The first five 311 Series trains, sets G1 to G5, began services with the timtetable revision of July 1989, being assigned to Special Rapid workings on the Tokaido Mainline, and were later also introduced on Chuo Line rapid services as well.

Between June 2006 and July 2008, the pantographs of all fifteen sets were changed from the original square type to the same single-arm type

With the 311 Series withdrawal from Chuo Line services in 2015, surplus sets were transferred to Nagoya-bound rapid service works on the newly-electrified Taketoyo Line.

As of today, all fifteen 311 Series sets are still in service, assigned at Ogaki depot, and can be found running local and rapid services on the Tokaido Line and rapid services on the Taketoyo Line. However, depsite the trains being still perfectly adequate and in good shape, JR Central already has plans to replace the 311 Series (togheter with the 211 and 213 Serieses) with the brand-new 315 Series, wich is to be introduced between late 2021 and 2025.

The 311 Series was designed to be operated on all the electrified lines under JR Central’s control, including the steep and difficult Minobu Line. Plans were also made to use the 311 Series on direct trough-services with the Aichi Loop Railway, with the trains’ roller-blind destination indicators all predisposed for the addition of new destinations. However, such plans never came to fruition. The unused spaces in the 311 Series’ rollerblinds were finally “filled-in” when the trains began services on the Taketoyo Line in 2015.

The 311 Series was the first JR Group non-limited-express train to be fitted with in-car payphones. However, due to their declining usage, they were all removed in March 2007.