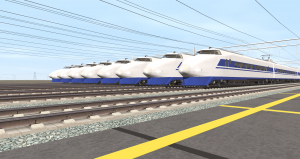 Originally, JNR had intended to continue the production of 0 Series sets, with the introduction of yet another improved batch (having produced, and still manufacturing 0s for 20 straight years at the time), but as rolling stock technology had considerably improved over the last 20 years, JNR finally settled for an entirely new design, to be introduced on both the San’yo and Tokaido Shinkansen.

Classified 100 Series, the new Shinkansen trains were conceptually based on the lastest-batch 0 Series, but incorporated several technical fetaures from the much more advanced 200 Series for the Tohoku Shinkansen, wich had been introduced just a few years earlier, in 1982.

However, the most striking change was made in the exterior design: as by the early 1980s the 0 Series was no longer the image of the “world’s fastest train”, having been replaced by the striking orange of the French TGV PSE; JNR attempted to win that “image” back with the 100 Series by designing a slightly sharper nose with more-modern-looking horizontal headlights. These were permanently “white”, but had an translucent red filter that was electrically lowered “curtain-style” to change the headlights color from white to red, making them taillights.

Another notable fetaure of the 100 Series was the introduction of two double decker cars in the middle of the consist- the first for a Shinkansen train: one was a panoramic buffet car and the other was a reserved-seating “Green Car”.
Besides the standard blue-and-white livery, the two bilevel cars fetaured a sylized red “NS” (“New Shinkansen”) logo on their sides; this was later removed upon the privatization of JNR.

Last, but not least, the 100 Series saw a brief return to the wide passenger windows, instead of the tiny aereoplane-like ones used on later-batch 0 Series sets to combat metal fatigue. As we know, after the 100 Series all Tokaido and San’yo Shinkansen trains went back to the small windows, starting with the 300 Series in 1992.

The iconic look of the 0 Series was kept, but updated in almost evry single aspect.

The design was finalized in 1984, and in the same year, produtction of the fist prototype set, formation X-1, began. The set was completd in early 1985 and began a series of trial runs on the Tokaido Shinkansen starting from the 27th of March of the same year. 100 Series regular revenue services began on the 1st of October 1985, when the X-1 prototype started running some Hikari services.

Full production sets eventually entered service starting from the 13th of June 1986. Like the prototype sets, these were manufactured by a consortium made of Hitachi, Kawasaki Heavy Industries, Kinki Sharyo, Nippon Sharyo and Tokyu Car Corporation, the créme de la créme of Japanese rolling stock manufacturers.

The full-production sets initially entered service without the double-decker cars; classified as G-formations and assigned to Tokaido Shinkansen Kodama services, they recieved the two double decker cars in November 1986 and were reclassified as X-formations and reassigned to faster Hikari services.
Eventually, by the time JNR was privatized in 1987, a total of seven plus one 16-car sets had been manufactured, with subsequent orders for the 100 Series being placed by the successors of JNR: JR Central and JR West.

JR Central was first, ordering a further 50 sets, classified as G-Formations. These were nearly identical to the X-formations, but without the buffet car, wich was replaced by another double-deck green car. JR West followed suit, ordering nine 16-car sets, classified as V-Formations for use on special “Grand Hikari” services. Nearly identical to JR Central’s G-formations, JR West’s Grand Hikari had 4 double-deck green cars instead of only two.

While fast, comfortable and reliable, the 100 Series was well obsolete even before it entered service: in true JNR style (wich favoured well-proven solutions over innovative ones) the technical equipment, especially the electric one, was changed very little from the one of the original 0 Series sets of 1964.

Therefore, both JR Central and JR West started to jointly design an entirely new Shinkansen train, ditching as much former JNR influence as possible. The result of this design effort became the 300 Series, wich entered service in 1992, the same year that 100 Series production stopped.

The 300 Series was a radical departure from the JNR-designed Shinkansens, with it’s energy-saving GTO-VVVF inverter control and the curved wedge front profile, replacing the aereoplane-like round one of older types. Entering service on Nozomi and Hikari serviceson both the San’yo and Tokaido Shinkansen, the 300 Series gradually displaced the 100 Series to slower Kodama services, replacing the lastest-batch 0 Series, wich were completely retired from Tokaido Shinkansen duties in 1999.

On the San’yo Shinkansen instead, due to JR West being far less wealthy than JR Central, 100 Series survived relatively longer, being completely reassigned to Kodama services by the early 2000s. As these services have a far lower ridership than the faster Hikari and Nozomi services, starting from 2000, JR West’s 100 Series sets were shortened to 6 and even 4-car sets. At the same time they were repainted in a distinctive dark grey and lime green livery, intended to distinguish trains running Kodama services from those running Hikari and Nozomi services, wich kept the blue-white livery. A similar treatment was also applied to some of the remaining 0 Series sets, wich were also shortened to 6-cars and repainted in the dark grey and lime green livery. Three of these K-formations were eventually returned to their original blue-white livery in 2010.

By the mid-2000s, a total of twelve 4-car “P-formations” and six 6-car “K-formations” was obtained by rearranging 100 Series sets. These did not have double-decker cars nor green cars (of any kind: single or double-deck): all of these, togheter with the rest of the surplus cars, were scrapped.

Upon retirement from regular services, set P-2 (one of the 4-car P-formations) was moved to JR West’s Shinkansen training center at Shimonoseki, where it was used as a dedicated training set until March 2013.

Comfort-wise, the 100 Series Shinkansen was designed under the concept of “passengers first, railwaymen second”

At just four cars in length, JR West’s P-formations for Kodama services are the current holders of the title of “shortest Shinkansen in regular active service” (including the mini-shinkansen serieses and the “Doctor yellow” inspection trains).

Due to it’s sharp looks, compared to the earlier 0 Series, for the short period while it was the newest Shinkansen type, the 100 Series enjoyed a relative popularity, being fetaured in many different movies and anime (notably City Hunter and Case Closed!/Detective Conan, where episode 5 of the original 1996 season, “the bullet train bombing cases” completely revolves around a 100 Series set).

The morning of the living dead! A very rare recording of training set P-2, in quite a dire state, crawling thru the sidings of Shin-Shimonoseki station.