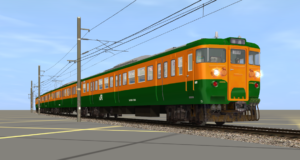 Upon it’s formation in 1987, JR East inherited 1186 115 Series cars from JNR. Most of these (all, if we exclude the Chuo Line ones) were fitted in the “Shonan” livery and were deployed for use in the Nagano, Niigata and Takasaki areas (such as on the Takasaki, Ryomo, Utsunomiya or Joetsu Lines).

Starting from immediately after the privatization, the 115s in the Niigata area started being repainted in their own distinctive livery, followed not much after by Nagano area units, with only the Takasaki Area units remaining loyal to the green and orange livery.

With the opening of the Nagano Shinkansen, part of Nagano Depot’s 115 Series fleet was repainted and handed over to the third-sector Shinano Railway, wich was to run local services on the truncated remains of the Shin’etsu Main Line, and starting from the Nagano Winter Olympics of 1998, all of JR East’s Nagano Depot remaining 115 Series trains lost their shonan livery for the light blue-white “2nd Nagano livery” in a couple of years.

In the early 2000s, with the introduction of the modern E231-1000 and E233-3000 Serieses in the Tokyo Area, the older (but newer if comparted to the 115s) JNR-late-design 211 Series was displaced and entered service in what was the “115 Series” territory: with the exception of the most difficult Takasaki Line duties (entrusted to a minority of early-batch 211 Series sets), all of the remaining lines managed by Takasaki Depot were almost exclusively served by 115 Series trains.

The replacement remained slow, but steady, with the last 115 Series set being retired from the Ryomo Line on the 16th of March 2018, ending the era of JNR’s iconic orange and green suburban trains in the Tokyo Area.

In Niigata, the 115 Series’ “Stronghold”,  the Shonan Livery was also slowly but steadily replaced by a variegated plethora of liveries, but a few orange-and-green colored sets (such as Set N38) still survive to this day, altough their replacement (as with the whole 115 Series fleet) is imminent – as of today, only a tiny number of twenty-two 115 Series cars are still in service, all in the Niigata Area – less than 2% the total number of cars that JR East had inherited from JNR upon it’s privatization.

Depsite being de-facto retired, some 115 Series trains are still assigned to Takasaki depot to this day, meaning they can re-enter service if more modern stock is suddenly unavaible, altough this hasn’t been the case yet.

Ryomo Line 115 Series trains are primarily fetaured in Makoto Shinkai’s 5 Centimeters Per Second animated movie, with one of them shown being delayed by about three hours due to a heavy snowfall that obstructed the line.