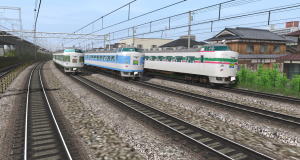 The 189 Series had been introduced in 1975 as a derivative of the 183 Series fitted with the necessary equipment to enable multiple-unit working with the EF63 electric helper locomotives to run over the steeply-graded Usui Pass.

Upon it’s formation in 1987, JR East inherited the whole 189 Series fleet (155 newly-built cars plus 25 cars converted from other serieses, for a total of 180 vehicles), wich at the time was exclusively assigned to Nagano depot.

To better differentiate between the two, in the late 1980s JR East started repainting it’s 189 Series sets in two distinctive livieries, wich used the same “scheme” but with different colours: cream, lilac and light purple for sets dedicated to the “Azusa” service and cream, dark green and light grey for trains dedicated to the “Asama” service, with both livieries gradually replacing the JNR-era one.

A third livery for the 189 Series came to be in 1987: due to the staunch competition from Highway express busses running on the Chuo, Kan’etsu and Joshinetsu expressways (E20, E17 and E18), JR East decided to introduce a premium “Azusa” service, dubbed the “Grade-up Azusa”. To operate this new service, eight 189 Series sets were extensively refurbished between 1987 and 1989 and between 1990 and 1992. The refurbishment consisted in a general interior renewal, including the fitting of reclining seats, and most notably, a new livery: a base of cream with green and pink horizontal lines.

Shortly after, a new type of train was introduced on “Azusa” services: the tilting E351 Series, wich entered service on the 23rd of December 1993 on dedicated “Super Azusa” services. The E351 Series was intended to replace the oldest 183 and 189 Series sets in service, and to increase the top speed of “Azusa” services on the tortuous Chuo Main Line, thanks to it’s tilting system.

In 1997, with the opening of the Nagano Shinkansen, the steeply graded Usui Pass section was closed, thus truncating the Shin’etsu Main Line in half. With “Asama” services being re-assigned to the Shinkansen, the 189 Series fleet thinned, with many sets being surplus. A few were however kept as spare trains, and thus began to be used interchangeably with both 183 and 189 Series sets on Chuo Line services.

The introduction of the E257 Series in 2001 gradually thinned again both the 183 and 189 Series fleet, wich by the mid-2010s had now been relegated to minor workings and charter trains.

The introduction of the E353 Series in 2017 finally spelled the “end” for both serieses, wich by then had been used only on temporary services. The last 189 Series in JR East service were retired in March 2019.