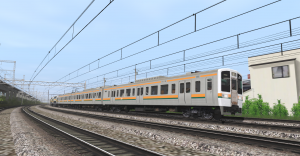 After the demise of JNR, JR East was the first to have it’s own order of 211 Series trains: by 1989 a total of 325 additional cars of all four subserises had been built by Kawasaki Heavy Industries.

JR East’s newly-built 211 Series sets were deployed on both the Tokaido and Takasaki and Utsunomiya Lines, being used interchangeably with JNR-built sets. One notable difference however is that starting from 1988, JR East’s new 211 Sets were built with a double-decker SaRo 211 and 212 double-decker green car, replacing one of the single-level SaRo 211 green cars in each consist. The new double-decker green cars were essentially identical (and also compatible) with the SaRo 124 and 125 type green cars introduced at the same time for 113 Series trains, both on the Tokaido and Sobu lines.

Depsite the large number of cars produced, the 211 Series never managed to completely replace the 113 Series on the Tokaido Line and the 115 Series on the Takasaki and Utsunomiya lines, wich remained a consistent part of the lines’ fleet well into the early 2000s.
It was only in 2000 that a definitive replacement was introduced: the E231-1000 Series, a suburban service derivative of JR East’s successful E231 family. The E231-1000 Series finally replaced all 113 Series sets operating Tokaido Line services by 2006. The SaRo 124 and 125 double-decker green cars of the 113 Series’ formations were salvaged and re-inserted into the 211 Series formations still in service, replacing the single-deck SaRo 211 green cars, wich were all withdrawn and scrapped by 2007.