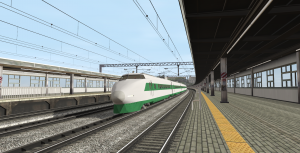 These three trains came to be in 1992 by mixing surplus intermediate cars coming from the G and K formations of the 200 Series and newly-built cars of the same design.
Out of the surplus intermediate cars, six were converted into cab cars, using the same sharknose-style front of the recently-introduced H formations (themselves based on the 100 Series design of the Tokaido and San’yo Shinkansen).

Depsite the looks, these are radically different from the earlier H-formations of 1990 (the other sharknose-style 200 Series): they have a different equipment arrangment (such as pantographs on one of the cab cars), no double-decker green cars and an overall general layout closer to the other F formations (of wich they’re part) rather than to the H formation. The tell-tale fetaure between H sets and F formations F5, F8 and F40 (besides the obvious lack of double-decker cars) is in the livery: H formations have a small white decorative line on the lower part of the green window band, while formations F5, F8 and F40 have a solid green band (like all the other F formations, and by extension, 200 Series trains).

Formed as 12-car sets, these three formations, numbered F5, F8 and F40, entered service in 1992 on the Tohoku Shinkansen, being used interchangeably with the other “standard” F formations, primarily on Tokyo-Morioka Yamabiko services, but later also on Joetsu Shinkansen Tanigawa services as well (many of wich trough-running on the Gala-Yuzawa Line).

However, with the introduction of newer Shinkansen serieses starting from the late 1990s (primarily the E2 Series) formations F5, F8 and F40 became increasingly relegated to lesser duties, before being eventually withdrawn from service by 2007, togheter with the rest of the F formations.