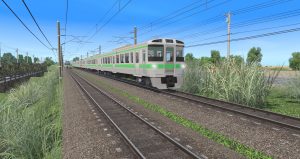 The 721 Series was introduced in 1988 as the first electric multiple unit designed by the newly-formed JR Hokkaido, and was intended to relieve congestion on suburban services in the Sapporo area.

In the mid-1980s, ridership on Sapporo area commuter services had increased by several times compared to previous decades, especially thanks to the increasing urbanization and expansion of the city area. As an answer to this, in it’s closing years, JNR had built new stations and re-organized the schedules of suburban trains, increasing them. However, depsite being fully double tracked and electrified, the overall capacity of the network was severely hampered by the rolling stock used to run suburban services: the 711 Series electric multiple units that dated to the mid-1960s, wich were built like the express-type trains of the “DC network” (such as the 165 and 169 Serieses) and thus with their two doors and lacklustre accelleration were becoming increasingly inadequate to the high-ridership commuter services and the even more inadequate locomotive-hauled trains consisting of 50 Series coaches, wich also had only two doors per car and a worse accelleration.
Furthemore, since most stations had been built with no passing tracks, commuter services had to share the two tracks with a multitude of services, from freight to limited express trains, meaning that dwell time at stations needed to be as short as possible.

In 1986 plans were made to experimentally retrofit a third, central door on several 711 Series sets and on a few 50 Series coaches as well, in order to speed up boarding and alighting and to pave the way for a planned 3-door electric multiple unit dedicated for Sapporo area services. These retrofits were carried out in June 1987, immediately after JNR’s privatization, but on a much smaller scale, with only a handful of 711 Series sets (among those set S-119) and a single 50 Series coach (Oha 51 41) being fitted with a central door. However, the experiment was a success, with railway technicians observing that a third door could reduce boarding and alighting times by nearly 50%. With these results in hand, the designing of the new three-door electric multiple units for Sapporo area services began right away.

The new trains, classified as the 721 Series, began regular services on the 3rd of November 1988, coinciding with the re-opening of Sapporo station, wich had been just rebuilt to the current elevated structure.
Based on the stainless steel bodyshell design of the successful 211 Series, the 721 Series also fetaured a few design cues from the KiHa 183-500 Series diesel multiple units, mainly the top headlight arrangment. In line with JR Hokkaido’s plans, the 721 Series was fitted with three sliding doors per side, with the door area being separated from the passenger compartment by a partition, in order to keep the freezing Hokkaido cold outside during winters. For summers insted, the new trains were Hokkaido’s first non-express trains fitted with air conditioning.

On the technical side, the 721 Series are 20Kv 50Hz AC-only multiple units, using bogeys derived from the 211 Series, but with several adaptations to the cold Hokkaido climate, mainly the usage of cast-iron brakes instead of the more modern disc brakes (this being a distinctive trait of JR Hokkaido rolling stock) to avoid losing braking power due to acquaplaning.

Like other contemporary suburban-commuter electric multiple unit designs, the 721 Series was manufactured in several batches and different subserieses:
The first batch, the -0 Subseries, consists of 22 3-car sets built between 1988 and 1992, fitted with thryistor-phase control and with a top speed of 120Km/h. These were intended for “general services”, both suburban and regional, from Sapporo to Otaru, Muroran and Asashikawa. In 2002, sets 15 to 22 were modified for a top speed of 130Km/h and reclassified as part of the -3000 Subseries.

The 2nd batch was introduced in 1992 and consists of four 6-car sets with thryistor-phase control and with a top speed of 120Km/h. These were introduced for dedicated “Airport Rapid” services between Sapporo station and New Chitose Airpot, via the Chitose Line. In 2002, all four sets were modified for a top speed of 130Km/h and reclassified as part of the -3000 Subseries.

The 3rd batch, classified as the -1000 Series, was introduced in 1993 and consisted of eight three-car sets fitted with GTO-VVVF inverters (derived from the ones used on JR Hokkaido’s 785 Series express EMU). An additional train, identical to the previous was delivered in 1994 as the “4th batch”.

The 5th and final batch (classified as the -4000 and -5000 Series) was introduced in 2003 and consisted of a handful of newly-built intermediate cars used to re-organize trains formed as two 3-car sets coupled togheter into proper 6-car sets, with the leftover cab cars being re-formed into proper 3-car sets by adding another newly-built cars.

Therefore, after the re-formations were completed, the 721 Series fleet consisted of 135 cars formed as 23 3-car sets and 11 6-car sets.

In 2000, many 721 Series sets dedicated to airport services were fitted with half-car-long “U-seat” reserved seating areas – on 3-car sets this area was placed in the cab-side of one of the cab cars, while on 6-car sets it was placed on the 3rd car on the “Sapporo Station side”. These “half-cars” recieved their own dedicated livery: red and blue with well-visible “U-seat” markings on the sides. Thanks to their popularity, in 2003, coinciding with the general 721 Series “re-formation works”, the size of the “U-seat” area was expanded to cover the full cars, wich were given a new blue livery.

Currently, depsite the introduction of newer electric multiple units, mainly the 731 and 733 Serieses, the 721 Series still forms the backbone of commuter and regional services in and around Sapporo, with all sets in service (except one, 1st Batch Set no. 17) and are a common sight on the electrified portions of the Chitose, Hakodate and Muroran Lines. Depsite the oldest trains having surpassing 30 years of age, JR Hokkaido hasn’t any plans to replace the 721 Series anytime soon, instead the whole fleet will undergo a general refurbishment in the next years, with the objective being to bring it closer, in terms of operational performance, to the 733 Series. In this regard, JR Hokkaido’s official plans are to retrofit all 721 Series trains with “high efficiency” equipment by 2030.

Trivia:
The 721 Series was the first train in the JR Group to use a “one-handle” master controller, something that would become commonplace only 15 years later, with the introduction of JR East’s Shin-Keiretsu Densha family of trains.

Model Trivia:
At 32 consist total, this is the new record holder for the title of “most consists possible made out of a single basic series”.