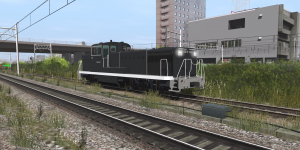 This locomotive is generally used as an “helper” on steam revival services, assisting venerable steam locomotives on the most difficult sections of various lines. As such, DE10 1690 was repainted in an all-black livery with white handrails and other body parts, directly inspired from the steam locomotives’ one. It is mostly seen operating togheter with JR Hokkaido’s C11 no°171, but it isn’t uncommon for DE10 1690 to run some maintainance trains as well.