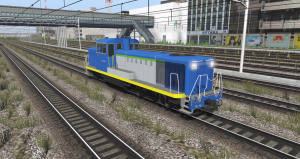 This unit is a dedicated shunting locomotive used by JR Hokkaido to move rolling stock within it’s huge Naebo Works, the largest rail workshops in all of Hokkaido. Originally these duties were assigned to the much more compact DD16s (and earlier on to DD13s), but in 1997 the pair was replaced by a single surplus DE10 moved from Asashikawa depot – unit 1741.

As something of an “inside joke”, DE10 1741 was repainted in a livery reminescent of the “HET” (“Hokkaido Express Train”) one seen on the KiHa 281 and 283s that the locomotive had to shuttle between workshops. Being an internal shunting locomotive, DE10 1741 was never seen outside of JR Hokkaido’s Naebo Works, as all of it’ saftey systems had be removed, making it unable to operate on main line tracks.

In 2005, DE10 1741 was replaced by a surplus DE15 as the Naebo works’ shunting locomotive, with the latter having been repainted in a yellow and dark gray livery based on the one of the “DMV”, the dual mode vehicle (in short, a road/rail bus) intended to serve low-patronage lines, wich JR Hokkaido had been (and still is) developing for an awful lot of time.

The current whereabouts of DE10 1741 are unknown, but it was probably scrapped.