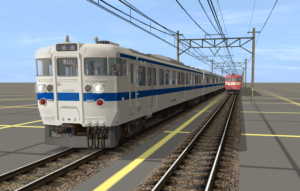 Upon it’s formation in 1987, JR Kyushu inherited all of the 415 Series trains in operation in Kyushu from JNR. This included the 415-0s and the 415-1500s in both original reddish-brown and white liveries, and their predecessors too: the 421 and 423 Serieses.

JR Kyushu continued the “livery change” of the 415 Series trains, with a small modification: the addition of a second, thinner blue line above the doors; a livery that inspired the one that was applied shortly after on JR Kyushu’s local DMUs such as the KiHa 40 and KiHa 52s.

Excluding the DC-only 103-1500 Series for the Chikuhi Line (and Fukuoka Subway trough-services), in the late 1980s the 415 Series was JR Kyushu’s only electric multiple unit, and by then, the 415-0s were becoming increasingly obsolete and inadequate for mainline services. As such, the first train designed by JR Kyushu was to be an AC suburban train: the 811 Series, wich entered service in 1989, to replace the 421 and 423s and to displace the 415-0s to less-utilized, local lines.

This “erosion” was slowed when a few surplus JR East 415 Series (-500 subseries with all-longitudinal seating) from the Joban Line were transferred to JR Kyushu in 2009.

For the celebration of the new millenium in 2000, a single 415 Series set, FM-5, was repainted by JR Kyushu into the old JNR reddish-brown “AC/DC livery”, wich it carried until it was replaced in 2012.

As of now, there are very few 415-0 Series sets in service (all in 4-car sets used on local services on regional lines), and they’ll be retired soon, as their replacement, the ugly 821 Series entered service in 2019.

There is not yet a “planned replacement deadline”, but it’ll be a matter of a couple years before 415-0s will disappear from Kyushu’s tracks, altough 415-1500s might last a little bit more.