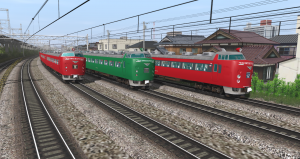 From left to right: “Red Express” Livery, “Kirishima” Livery and the “Kamome” Livery.

Upon it’s formation in April 1987, JR Kyushu inherited a sizeable fleet of 485 Series trains, a total of 324 cars wich included sets with both the original “bonnet” and the later “flat” front styles.

In the 1990s, to improve the image of the company, and to better distinguish between services operated by the 485 Series sets, JR Kyushu decided to repaint them in a set of unique livieries.
The most famous of these is surely the all-over “Red Express” livery, wich was applied to sets assigned primarily to Nichirin services between Miyazaki Airport and Oita, Midori services between Hakata and Sasebo, Ariake services between Hakata and Omuta stations and the Kirishima & Hyuga services, two combined express trains that ran between Miyazaki and Kokubu stations. Sets assigned to the Kirishima & Hyuga service were later repainted in an all-over green livery, wich however retained the same scheme as the previous “Red Express” livery.

485 Series sets assigned to Kamome services did get their own livery as well: a derivative of the “Red Express” one with an additional dark grey band around the side passenger windows.

However, already by the late 1980s it was time for JR Kyushu to develop an entirely new express train to replace the most worn-out 485 Series sets. This replacement came to be in 1988 with the introduction of the 783 Series on Nichirin, Midori and Ariake services, wich led to a first retirement round of 485 Series sets. A few years later, with the introduction of the 787 Series in 1992 and of the 883 Series “Sonic” in 1995, even more 485 Series sets were retired, with all the bonnet-style sets being taken out of service and scrapped by 1999.

The remaining “flat front” sets were gradually relegated to less important services and were finally retired between 2011 and 2012.