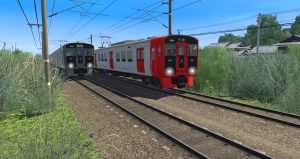 The 813 Series was introduced in 1994 as a replacement for the old JNR-era 421, 423 and 715 Serieses, the latter of wich were former 583 Series AC/DC limited express sleeper EMUs converted for suburban service, for wich they proved grossly inadequate.

Derived from it’s predecessor, the 811 Series, the new 813 Serieses retained the same bodyshell and layout albeit with many improvements. The front was completely redesigned, curtesy of Mr. Eiji Mitooka, thus making the 813 Series the first suburban train penned by JR Kyushu’s “own” famous designer.  The stainless steel bodyshell remained completely unpainted, with the doors and the conventional steel front “mask” and cowcatcher being the only painted things in the train, finished in a strong red, the company colour of JR Kyushu. The front of the train was stylishly painted solid black, with a “Tsubame” sticker on the front door and “813” stickers on both adjacent sides.

The first sets began to be manufactured by Kinki Sharyo, togheter with JR Kyushu’s Kokura Workshops, in 1994. Production of these trains lasted for fifteen years, with the last sets being delivered in 2009.
For the sake of “operational flexibility”, initially the 813 Series trains were formed in 2-car sets, however, the trains built from 1995 onwards were formed in 3-car sets, and a third additional car was fitted to all the “original” 2-car sets by 2003.

Due to the long production cycle, several subseries were made:

The original 1st batch, classified as the -0 subseries, consists of the first nine 2-car sets (numbered R001-R009) delivered in 1994 for services on the Kagoshima Main Line. Sets R001 to R006 had been manufactured by Kinki Sharyo, while sets R007 to R009 were built by JR Kyushu’s Kokura Workshops. Assigned to Minami-Fukuoka Depot, they began revenue service on the 1st of March 1994.
In 2002, set R008 was involved in a crash on the Kagoshima Main Line, between Ebitsu and Kyushukodaimae stations, and it was subsequently written off.

Batches 5 to 7 are classifed as the -200 subseries and consist of thirty-six 3-car sets built between 1997 and 1998 to increase the number of avaible trains on the Kagoshima Main Line, particulary on the busy reigonal traffic between the metropolitan areas of Fukuoka and Kitakyushu. These were also intended to replace both the 421 and 715 Serieses. All trains were made by Kinki Sharyo, with the 5th batch (sets R201-R222) built between March and July 1997, the 6th batch (sets R223-R228) built in March 1998 and the 7th batch (sets R229-R236) being completed in September 1998.

The 8th batch consists of five intermediate cars built by Kinki Sharyo in 2001 for sets R014-R019, wich were to be lenghtened to 3-car sets and transferred to the Fukuhoku-Yutaka line. This line was “created” in 2001 by amalgamating services running on the newly-electrified Sasaguri Line and part of the Chikuho Main Line. The line ran between Hakata and Kurosaki via Keisen and Nogata, acting as a bypass to the busy Kagoshima Main Line. 813 Series trains dedicated for this service were fitted in a dedicated livery, where a dark grey color replaced the pleasant JR Kyushu red on both the front and doors. Mitooka-style “CT” (Commuter Train) yellow stickers were also applied to the bodyshell, on one side of each passenger door. Set R228 from the 6th batch was also repainted and transferred to the Fukuhoku-Yutaka Line at around the same time.

The 9th batch (R301-R303) consists of three sets built by Kinki Sharyo in 2003. Two of them were intended to increase the number of avaible trains, while the third one was intended to replace 1st batch set R008, wich had been damaged in the 2002 accident and later written off. This set was actually built with as much component as possible salvaged from the withdrawn set R008.

The 10th batch consists entirely of eight intermediate cars built in 2003 to extend the last remaining -0 series 2-car set to three cars. These cars were numbered 401 to 407 and 409: number 408 was missing as it “destination” set R008 had been already withdrawn for the afromentioned reason.

The 11th batch consists of three 3-car sets (R1001-R1003) built in 2005 to increase the number of avaible trains. These are designed to be extended to 4-car sets, via the addition of another intermediate car, if the need ever arises. In 2009 sets R1002 and R1003 were repainted and moved to the Fukuhoku-Yutaka Line.

Finally, the last two batches, the 12th and 13th (classified as the -1100 Series) were built between 2007 and 2009 to increase the capacity of the Nippo Main Line. They’re nearly identical to the -1000 Series except for the top portion of the front, wich was redesigned to a much more curved shape than other 813 Series trains to fit an enlarged LED destination indicator (derived from the one of the KiHa 200-200 series DMUs built at the same time).
[this version is not present in the pack, as, in all due honesty, i thinks it ruins the well-tought out appearance of the 813 series]

In total, eighty-five sets have been manufactured, for a total of 255 cars, making the 813 Series one of JR Kyushu’s largest fleet of electric multiple units. As of today, all sets are still in service (except for R008) and they can be commonly found on the Kagoshima Main Line (up to Kumamoto station), the Nagasaki Line, the Nippo Line and the Fukuhoku-Yutaka Line.

Thanks to their versatility (as they’re able to be used in multiple-unit formations not only with their predecessors, the 811 Series, but also with their succerssors, the 815 and 817 Serieses), the 813 Series enjoys an enviable status within JR Kyushu, being one of the company’s most famous, recognizable and well liked suburban trains (especially if compared to the rather bland successors, in particular the 817 Series), and depsite the first batch sets now nearing 30 years of age, JR Kyushu has no intention to proceed to a replacement. Instead, like the 811 Series, the 813 Series fleet will very likely undergo a refurbishment program (all the trains have actually remained mostly unchanged since their delivery!), meaning that they will remain in service for the forseeable future.