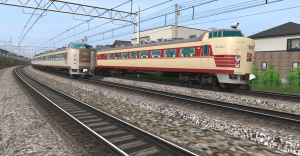 This peculiar subseries came to be in the 1990s with the electrification of the Fukuchiyama Line. Until then, except for the 381 Series, JR West (and the preceeding Kansai Area JNR division) never had DC-only limited express electric multiple units: the majority of services not operated by the 381 Series were assigned to the AC/DC multivoltage 485 Series, whether the service ran completely either AC or DC electrification, thus with the AC/DC capability of the 485 Series being unused.

On the Fukuchiyama line, 485 Series trains had been introduced in 1986, running limited express services between Osaka and Fukuchiyama station. By 1990, their place on the line was stable, and the vast majority of the sets in service handn’t run under AC electrification in more than five years. Therefore, JR West decided to convert the Fukuchiyama Line 485 Series sets to DC-only trains.

The conversion was carried out at JR West’s Suita, Takatori and Matsuo workshops between 1990 and 1991, followed by additional sets being converted in 1996, 2004 and 2009. After the conversion, the former 485 Series sets were reclassified as part of the 183 Series, togheter with their “born-DC-only” cousins.

The newly-converted 183 Series sets were divided in three subserieses: the -200 subseries had it’s AC-capable equimpent still installed, having been simply cut off and isolated from the main electrical circuit, while the -700 and -800 subseries had their AC equipment completely removed.

In the same year, JR West was electrifying the Nanao Line in Ishikawa prefecture to enable direct trains from Osaka and Nagoya to reach the Noto Peninsula, a popular tourist destination.

Both the 415-800 Series and the 183-200/700/800 Serieses re-entered service on their respective lines in 1991.
485 Series sets converted between 1996 and 2003 were repainted in JR West’s new “Café au Lait” brown, cream and blue livery, while the sets converted between 1990 and 1996 and between 2004 and 2009 were repainted in a livery largely identical to the JNR-era limited express standard cream and dark red one, with the exception of the addition of a thin cream line on the lower part of the dark red band on the side windows.

However, with the introduction of newer DC-only limited express trains, in particular the 283 Series for Kuroshio services, introduced in 1996, and the 287 Series introduced in 2010, the converted 183 Series sets were gradually downgraded to less important duties, with some sets being also replaced by transferred 381 Series trains, themselves displaced as well by the introduction of newer stock.

By 2012, only seven out of 23 sets of the 183 Series were left in service. The converted trains finally ended their service with the spring timetable change of 2013, making their final run on the 16th of March.