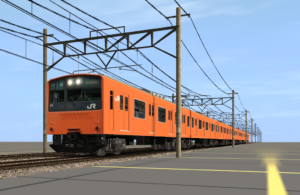 This is a reskin of the Chuo Line 201 Series by Rizky_Adiputra.
All the necessary dependencies are included in this package, avaible on the DLS or from Rizky’s website
Reskinned with permission.

It might sound strange to move an old train from an hevily used line to an another heavily-used line, but that’s what JR West could afford as it’s the JR Group company with the lowest network lenght/wealth ratio, as it has to stand angist other fiercely competitive private companies such as Hankyu, Keihan, Hanshin and Kintetsu, and therefore it can not afford to make large-scale replacements like JR East or JR Central did. This is also one of the reasons why JR West is as of today still using a lot of former JNR stock.

Anyway, at the time, the Osaka Loop Line was in a rather dire situation, as it’s rolling stock was mostly unchanged since the 1960s: with the exception of rapid services assigned to the modern 221 and 223-0s, local services on the line were exclusively ran by 103 Series trains, wich were introduced on the line in 1969, but were of 1963 design!

Some of the Osaka Loop Line 103s did underwent JR West’s N40 refurbishment program, but most were still in their original state; and with some sets nearing 40 years of age and JR West having no money to make a proper replacement, a solution was quickly needed.

The solution was in the former Tokaido Line 201s, wich weren’t exactly new (they had been in service for about 20 years), but were certainly leagues above the 103s, and they had been all recently refurbished too!

Repainted in the line’s vermillion orange (a tonality a little bit lighter than JR East’s Chuo Line one), the refurbished 201s entered service on the Osaka Loop Line in 2005, supplementing the 103s and replacing the most worn-out ones.

Depsite the introduction of the 201s, only a minority of the 103s was replaced, with the majority running well into the mid-2010s. By then, the ageing 103s, and now 201s, posed quite a problem for JR West, wich finally decided to carry out a replacement for both.

Introduced in 2016, the 323 Series was the Osaka Loop Line’s first new train in about 45 years; based on the 225 and 227 Serieses, one of the most notable difference with the older JNR-designed stock was that it had three doors instead of four, to allow for the retrofitting of platform-gate doors while still allowing rapid trains to stop (unlike the Yamanote Line, the Osaka Loop Line has to share tracks with other trains) as the afromentioned 221 and 223 Serieses used on rapid services also have three doors instead of four.