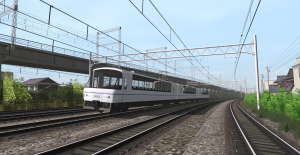 The JR West 213 Series pack is required for some consists.

This lone 3-car set was built in 1988 for services on the Seto-Ooashi Line, via the newly-opened Great Seto Bridge. It is basically a self-propelled version of the KuRo 212 panoramic cab cars for Marine Liner trains, built at the same time and with the same design. Unlike the KuRo 212 cars, wich were intended to be an attractive “addition” to the otherwise conventional 213 Series trains, the Super Saloon Yumeji was intended to be tourist-charter train hybrid, taking full advantage of the panoramic wiews offered by the Seto strait crossing.

The Super Saloon Yumeji was manufactured by Kinki Sharyo and consisted in two powered cab cars (one of wich was fitted with a pantograph) of a design nearly identical to the KuRo 212 cars (also manufactured by Kinki Sharyo) sandwitching a power car built to the same design. However, unlike the KuRo 212 cars, wich were limited to “warm areas”, the Super Saloon Yumeji was designed to be able to run all over JR West’s DC-electrified network and therefore was fitted with snow-resistant equipment and had a maximium speed of 120 Km/h (whereas the KuRo 212s, as trailers for the 213 Series, had a maximium speed of 110 Km/h).

With the retirement of the 213 Series from Marine Liner services in 2003, the Super Saloon Yumeji also stopped running those services, now being used exclusively for it’s intended charter train purpose, being used, among other things, regularily on New Years’ Day on special services between Okayama and Kotohira. However, the usage of the set declined thruought the years, and in 2010 JR West decided to retire it. The Super Saloon Yumeji made it’s final run on the 7th of March 2010.

Unfortunately, one month after it’s retirement, the whole set was packed and sent to JR West’s Suita workshops to be scrapped.

Trivia #1:
While the Super Saloon Yumeji is classifed as a 211 Series set as a “whole”, only the KuMoRo 211 (the cab car with pantograph) and MoRo 210 (the intermediate car) are also officially classified into the 211 Series – the third car, KuMoRo 212 is actually classifed as part of the 213 Series.

Trivia #3:
The cab cars of the Super Saloon Yumeji were fitted with Karaoke machines for usage on charter trips.