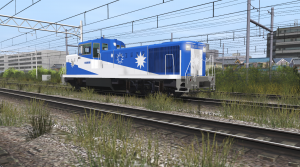 This locomotive is assigned to the “Okizumo Orochi” tourist train running on the Kisuki Line, running between Kisuki and Bingo-Ochiai stations via Izumoshi station. The Okizumo Orochi began operations in 1998, formed of two converted 12 series coaches and DE10 1161, all painted in a matching blue and white livery with 10-point star motifs (a liverty overall partially inspired by the famous “Night on the Galactic Railroad” novel by author Kenji Miyazawa).
Due to the popularity of the train, a second locomotive was repainted in the Okizumo Orochi Livery: DE15 2558, wich has since been used interchangeably with DE10 1161. Both locomotives are still in service in their “Okizumo Orochi” livery, and sometimes are also used for non-tourist duties, such as empty stock movments or maintainance trains.