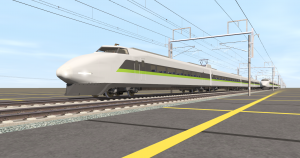 Due to JR West being far less wealthy than JR Central, on the San’yo Shinkansen, the 100 Series survived relatively longer than their counterparts on the Tokaido Shinkansen, being completely reassigned to Kodama services by the early 2000s. As these services have a far lower ridership than the faster Hikari and Nozomi services, starting from 2000, JR West’s 100 Series sets were shortened to 6 and even 4-car sets. At the same time they were repainted in a distinctive dark grey and lime green livery, intended to distinguish trains running Kodama services from those running Hikari and Nozomi services, wich kept the blue-white livery.

A similar treatment was also applied to some of the remaining 0 Series sets, wich were also shortened to 6-cars and repainted in the dark grey and lime green livery. Three of these K-formations were eventually returned to their original blue-white livery in 2010.

By the mid-2000s, a total of twelve 4-car “P-formations” and six 6-car “K-formations” was obtained by rearranging 100 Series sets. These did not have double-decker cars nor green cars (of any kind: single or double-deck): all of these, togheter with the rest of the surplus cars, were scrapped.

Upon retirement from regular services, set P-2 (one of the 4-car P-formations) was moved to JR West’s Shinkansen training center at Shimonoseki, where it was used as a dedicated training set until March 2013.