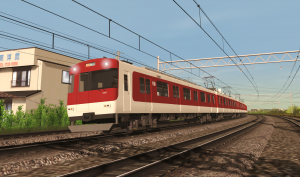 The 3200 Series was introduced by Kintetsu Railway in the late 1980s for the long-awaited commencment of trough-services between Kintetsu’s network and the Kyoto Municipal Subway Karasuma Line.

Trough-services between the Kintetsu network (specifically the Kintetsu Kyoto and Nara Lines) and the Karasuma Line had been already planned well before construction of the latter began in 1974. Kintetsu originally expected the subway’s construction to progress smoothly and relatively quickly, a forecast that was proved terribly wrong in a few years’ time: building a subway under Kyoto is a bit like doing the same under Rome: you can’t dig 20 meters without finding something of a historical-archeological value, and evry time this happens, works have to be interrupted and the object in question must be carefully extracted and preserved, something that is relatively simple to do with things like vases or other artifacts, but becomes difficult if you have to deal with something like the ruins of a medieval castle.

In other words, the subway’s construction works proceeded extremely slowly, and Kintetsu Railway became increasingly impatient. By the late 1970s the works on the first section of the Karasuma Line were almost completed, and at the same time, Kintetsu decided to build the “prototype” set of what was to be it’s series of trains designed specifically for subway trough-services: the 3000 Series. The first 4-car set of the 3000 Series entered service in 1979, being used as a testbed for several new fetaures that Kintetsu intended to use on it’s future serieses of rolling stock, such as a proprietary stainless-steel bodyshell design and the current chopper control. Kintetsu’s intentions were that when the Karasuma Line was eventually completed, full-scale mass-production of the 3000 Series could began.

After several delays, the first section of the Kyoto Municipal Subway Karasuma Line opened in 1981, connecting Kyoto and Kitaoji stations – this was however an isolated section, as the 3,4Km connection between Kyoto station and Kintetsu’s railway network at Takeda was still under construction! By the time this section was nearing completion, it was the mid-1980s, and with with rolling stock technologies having rapidly evolved in the meantime, the 3000 Series was no longer deemed appropriate (under some aspects it could be even considered as “obsolete”), therefore the commencment of full-scale production was not even considered by Kintetsu, wich instead focussed on an entirely new design that would fully take advantage of said new technologies, primarily the brand-new inverter traction control system.

Classified as the “3200 Series”, the new trains did not even remotely resemble their “spiritual predecessors”: the flat front common to all of Kintetsu’s commuter trains was replaced by a pleasant lightly curved one, inspired by the 7000 Series for the third-rail powered Keihanna Line wich were being designed at around the same time. Another fetaure derived from the 7000 Series was the asymmetrical front window arrangment, wich included a front emergency door, something mandated by law for all trains operating on subway lines in Japan. Besides the front, the bodyshell design was based on the one of the 8810 Series, then Kintetsu’s lastest “above-ground” commuter train, and was made of an alluminium alloy (wich had been previously experimented on formation 8069F of the 8000 Series), making the 3200 Series Kintetsu’s first mass-produced train using this material.

Ditching the already-obsolete chopper control, the 3200 Series was fitted with a very modern GTO-VVVF inverter control made by Mitsubishi Electric, something that was made relatively easy thanks to the unvaluable experience Kintetsu had already gotten with the Keihanna Line’s 7000 Series and the 1250 Series prototype for “main line” services. To denote the innovative traction control, the 3200 Series trains were fitted with very well visible “VVVF” stickers on the sides, between the first and second passenger doors.

Finally, even the livery was changed: ditching the standard all-over dark red livery of Kintetsu’s commuter trains (something almost unchanged since the 1930s), the new trains were fitted with a pleasant, but still nicely sober ivory-white livery with “Kintetsu red” side bands. Extremely well-recieved, the 3200 Series’ new livery soon became Kintetsu’s new standard commuter train livery, being applied on both newer trains and older ones as well, thus becoming a very recognizable icon of Kintetsu Railway.

With this wagonload of technological improvements, the first 3200 Series trains began to be built by Kinki Sharyo (a manufacturer owned by Kintetsu Railway itself) in late 1985. The first four 3200 Series trains, formed in 4-car sets, eventually entered provisional service in January 1986 on the above-ground Ikoma Line (you may have guessed it – the Kyoto-Takada section of the Karasuma line was not ready yet!), replacing in the meantime the last remaining 800 Series sets, wich were transferred to the Iga Line (today’s the “separate” Iga Railway, wich is still however part of the Kintetsu group).

As engeneering works on the Kyoto-Takada section came to near completion, in 1987 the four existing 3200 Series sets were lenghtened to six cars (with the addition of two intermediate trailers), and in the same year, two more six-car sets were delivered from Kinki Sharyo, bringing the total to six 3200 Series 6-car set.

Finally, Kintetsu’s long-awaited trough-services with the Karasuma Line began in November 1988, with the completion of the Kyoto-Takada section of the line (a full decade after the 3000 Series had been introduced!). Later that year, in December 1988, one more six-car set was added to the fleet, finally bringing the total to seven 6-car sets (for a total of 42 cars), all assigned at Saidaiji Depot.

As of today, the service pattern of the 3200 Series sits relatively unchanged since the late 1980s, with these trains being mostly used on trough-services between Kokusaikaikan (the current northern terminus of the Karasuma Line, opened in 1997) and Kintetsu Nara (via the Kintetsu Kyoto Line) or further south, to Tenri Station via the Kashihara and Tenri Lines.
However, depsite their status of “trough-service” trains, the 3200 Series can often be seen running above-ground services (even more so after the introduction of the 3220 Series) especially on the Kintetsu Nara Line between Kintetsu Nara and Osaka-Namba station, but above-ground services on the Kyoto Line (Kintetsu Kyoto to Kintetsu Nara) aren’t unheard as well. This is possible thanks to the fact that Saidaiji Depot, to wich the whole fleet is assigned to, is located almost at the dead-center of Kintetsu’s 1435mm gauge network (the portion in the Keihanshin area atleast).

As of now, Kintetsu has not yet any plans to replace the 3200 Series, meaning that these trains will continue running for the forseaable future.

The ivory-cream and dark red livery introduced with the 3200 Series in 1986 remained Kintetsu’s standard commuter train livery until 2000, with the introduction of the “Series 21” family of trains, wich had an ivory white and grey livery with a thin yellow line. The first train carrying this livery was the 3220 Series (introduced in 2000) wich coincidentally is also a commuter train designed for trough-services with the Kyoto Subway Karasuma Line – the three sets in this series are actually intended to supplement the 3200 Series and can thus be used interchangeably with the latter.

The 3200 Series hold the very niche distinction of being one of the few trains designed for subway-trough-services to regularily run trough mountain tunnels, as is the case for Kintetsu Nara Line services between Kintetsu Nara and Osaka-Namba station, wich run trough the Ikoma tunnel. Another (very recent) example are the two JR East 209-1000 Series sets, former Chiyoda Line inter-running trains moved to the Chuo and Ome Lines.