Part of the “Bayerischer U-Bahn pack” – jump to the next part. 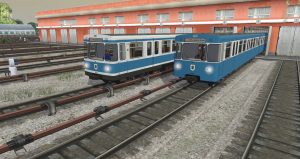 The Type A is Munich’s first subway train, having been introduced in the early 1970s with the opening of the first section of the city’s U-Bahn.

Plans for an U-Bahn in Munich had been made several times since the turn of the century, including some designs in 1905 that planned an alignment similar to the current S-Bahn sammstrecke between Munich Hauptbahnnof and Ostbahnnof, and some designs from the late 1920s that formed the basis of the present network.

Construction on this latter version was actually started in the 1930s, with the excavation of a brief tunnel section and a station box at Goetheplatz on the current U3/U6 common section. Works were interrupted due to the war in 1941 and did not resume in the post-war years – reconstruction of the more important tramway network was a priority. However, with some tunnels already built, the Munich city council considered as an option to move some tramway lines underground to reduce congestion in the city center. Several other plans were made, but in the end, in 1964, the decision was made to finally build a full-size subway instead, due to the increasing congestion and inadequateness of the current tramway network to keep up with the demand of the rapidly-expanding city.

Construction works on Munich’s U-Bahn were finally started for good in 1965.

Given that this was to be (West) Germany’s first new U-Bahn built after the war, the designers were free from technical costraints and as such opted for completely new and better standards than the existing ones of Berlin and especially Hamburg (and Berlin’s similar Kleinprofil lines).

The design of the trains was overall based on Berlin’s Großprofil lines (U5, U6, U7, U8 and U9 – especially the latter was then the lastest, and only new subway line to have been built in Germany after the war) but slightly lenghtened, from 16m to 18m in lenght. Otherwise, the rolling stock arrangment remained roughly the same, with a train formed of two car sets, with each car having three doors per side, cross-seating and no inter-car gangways.

Designed by MAN and O&K (the manufacturers of Berlin’s Class D trains, then the latest subway trains in Germany) and built by Waggon und Maschinenbau Donauwörth and Waggonfabrik Josef Rathgeber (a small factory in Munich that mainly built tramcars for the city’s network), an initial batch of three 2-car prototypes (numbered 091 to 093) was delivered in 1967 for testing on the semi-completed sections of the new U-Bahn. These were later followed by the delivery of 50 full-production two-car sets, built directly by MAN, O&K and MBB (with Siemens and AEG electrical equipment) in 1970.

Finally, the first section of Munich’s U-Bahn opened to the pubblic on the 19th of October 1971 between Kieferngarten and Goetheplatz (using parts of the tunnels built in the 1930s) as Line U6. A branch line to Olympiazentrum (Line U3) followed suit in May 1972 to serve the venues of the 1972 Summer Olympics (for wich the U-Bahn project was considerably sped-up).

Until then, all batches of the Type A trains were absolutely identical, sharing the same technical equipment, interior arrangment and fittings and so on. However, while the design was already rather modern in the late 1960s and 1970s, it no longer was by the early 1980s: with the widespread adoption and application of electronics in railway traction, better performances were now possible. In fact, already in 1974 an advanced chopper traction system had been retrofitted on prototype unit 093 – it gave rather good results, but due to the relative inexperience with the brand-new system (and the fact that many issues still needed to be ironed out), U-Bahn technicians decided against a widespread implementation, opting to wait for better times.

Seven years later, in 1981, times finally seemed ripe for the introduction of a new design of rolling stock. Six prototype 2-car sets (to be formed into two six-car trains or alternatively three four-car “Kurzzug”s) were manufactured by MAN, MBB and DWA and delivered in 1981. These new cars, classified as the “Type B” were a slightly improved and updated version of the Type As, but still retained a majority of fetaures from their predecessors (including nearly identical interior fittings). Even here, the new trains perfomred well, but still had some reliability issues, therefore the U-Bahn management opted again not to purchase the newer trains for the planned extensions of the network, instead deciding to “play it safe” and order as a stop-gap some more of the old, but proven Type A trains.

Hence, two more batches were ordered: a fourth one comprising 48 two-car sets (for the extension of Lines U3 and U6 to Holzapfelkreut and the creation of a branchline of the second trunk line from Hauptbahnnof to Rotkreuzplatz, to be served by Line U1) and a fifth, final one comprising 20 two-car sets for the opening of the third trunk line (the current U4/U5 shared section) between Karlsplatz and Westendstraße. Like the previous batches, these were also built by MAN, O&K and MBB and were, again, almost identical to the previous ones, with just one slight change: the external livery, wich was identical to the one of the Type B trains (instead of the “standard” Type A one).

However, the technical equipment is the same regardless of the livery, so it isn’t uncommon to see a newer-livery unit mixed in an original-livery train and vice-versa.

Finally, following much more testing and improvements, the first full-production Type B trains entered service in 1987, in time for the extensions of lines U4 and U5.

As of today, a full 50 years after the delivery of the first-batch sets, 155 out of 194 two-car sets (roughly three quarters) are in regular service thruought all six lines of the Munich U-Bahn, almost in the same original condition as they were when delivered in the 1970s, with classy wood-paneling-like interiors, superbly comfortable sofa-style seats and fancy “Solari Board” split-flap destination indicators – the only modification to have been ever made on these trains being an absolutely non-invasive retrofitting of roof-mounted passenger information screens in some trains.

Of the 39 two-car sets missing, six were sold to the Nuremberg U-Bahn in 2003 (and later scrapped after having run for a few years there), Units 149 and 176 were damaged beyond repair by a fire in 1983, with one car of set 149 being donated to the Munich Fire Brigade museum and put on display there, and one car of unit 179 being donated to a railway saftey research institution and used for fire research in Norway, two units (309 and prototype unit 192, ex-092) had to be withdrawn after shunting accidents – with the undamaged car of unit 192 being donated to the Deutusches Museum Vehrkszentrum, where it sits on display to this day and finally, prototype unit 091 has been preserved inside Fröttmaning depot, awaiting to be moved to MVG’s Museum. A handful of other Type A cars have been donated to private individual and groups and are being used as part of cultural centers in Munich and in Linz (Austria).

The remaining other have unfortunately been scrapped. Indeed, depsite an enviable career and still performing their service superbly, the Type A trains are to be replaced with much more modern, but far less comfortable and charming newer trains, derived from the current six-car articulated C2 class. MVG plans to complete the replacement of both the A and B Types by the 2030s, with Type As to be indicatively retired in 2024, almost surely arriving at that date nearly in the same condition as they were delivered more than fifty years earlier.

Until then, these superb trains will continue serving the city of Munich for years to come.

Trivia #1:
Since the Munich U-Bahn was designed to be driver-only operated, at stations the so-called “umbilical cord” method was used: after opening the doors, the driver had to get up from his seat, exit the cab with a wired microphone (connected to the rear cab panel, hence the “umbilical cord”), say out loud “Vorsichtig, die türen werden geschlossen!” (roughly “be cautious – the doors are closing”), press a button located externally on the car body (between the cab door and the first passenger window, below the car number and Munich city mark) that closed the doors and then return to his cab and take off.

This rather slow and complex system was quickly replaced by simple mirrors placed at the end of platforms, from wich the driver could see the whole platform without getting up from his seat.

The microphones and external door buttons are still present and functional, and are sometimes still used in regular service by an assistant driver or temporary conductor during crowded events (such as football matches).

The Type As are obviously resistor-controlled trains, using Siemens contactors. Depending on the load, car number and maintainance state, there are some cars in the munich U-Bahn on wich you can actually feel the contactor changing and the speed increasing by little sequential jerks.

Trivia #3:
Thanks to the fact that Nuremberg’s DT1 Series and Munich’s Type A trains are largely identical and interchangeable, several occasions saw a Nuremberg train lent to Munich and vice-versa:
Between the 6th of August and the 11th of September 1972, Nuremberg lent four 2-car sets to Munich to provide additional capacity during the Munich Summer Olympics on Line U3, wich was to serve the Olympic venues.

Between March and September 1978 it was Munich’s turn, lending three 2-car set to Nuremberg as a stop-gap mesaure to provide rolling stock for the extension of Line U1 to Weißer Turm until Nuremberg’s ordered additional batch of DT1 Series trains could be delivered.

Once again, between the 28th of October 1978 and April 1979, Munich lent Nuremberg three 2-car sets to provide additional capacity during the congress of the German Evangelical Church (wich that year was being held in Nuremberg).

Nuremberg then returned the favour in 1980, lending Munich three 2-car sets on the 19th of November to provide additional capacity during the papal visit of Pope John Paul II to the bavarian capital, and finally, Munich lent four 2-car sets to Nuremberg between the 4th of October 2006 and the 14th of October 2008 to cover for out-of-service DT2 Series trains that were undergoing refurbishment. A very 1960s-style scale model of an early design draft for the Type A trains. Most elements (the central driving position with three front windows, the openable windows, the livery desings) will be retained in the definitive design, but greatly simplified, including the bodyshell design itself. 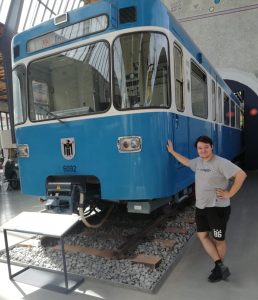 Yours truly with car 6092 (part of prototype set 092) at the Deutusches Museum Vehrkszentrum in Munich.

The ride to the museum (Schwanthalerhöhe station on Line U5) was with a later-batch Type A in the newer livery, while the ride back was with another Type A, this time an early-batch train in the original livery.

Bonus video:
A Youtube video from MVG’s official channel, exploring the Type A trains and their fetaures.