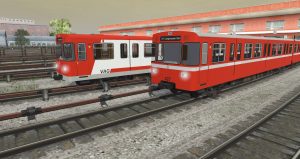 Like many other german cities, proposals for an U-Bahn system in Nuremberg were first put forward in the 1920s and 1930s, with some underground stretches being built for tramways in order to free space on the above-ground roads for the increasing automobile traffic. The second world war halted all these project for some time, as during the post-war years, the reconstruction of the tramway network had priority. Only in the 1950s and 1960s planning seriously resumed, with the Nuremberg city council opting in 1963 for an underground tramway network predisposed for future conversion to full subway standards at a later date (a sort of ante-litteram Premetro).

However, in 1965, thanks to the availability of funds from the federal government (able to cover up to 50% of the construction costs) and support from the lander government, the Nuremberg city council revised it’s decision, opting directly for a full subway instead.

Construction works on the first section of the Nuremberg U-Bahn started on the 20th of March 1967. This first section is part of the planned Line U1 wich was intended to connect the new-urbanized Langwasser area to the central railway station and the city center, before eventually continuing to the town of Furth.

As a way to save money, the standards of the new U-Bahn were designed to be identical to the nearby under-construction Munich U-Bahn, with both systems to share the same loading gauge, 750v DC third-rail electrification, signalling, equipment and rolling stock.

Nuremberg’s first U-Bahn trains were indeed a nearly-identical derivative of the then-under-construction Type A trains for the Munich U-Bahn, from wich they inherited the aluminium bodyshell design, interior fittings, traction and technical equipment (bogeys, motors, camshaft contactor resistor control system and so on), with the only difference being the fitting of electromagnetic track brakes (wich are not fitted on the Type As) and most notably, the livery: instead of the blue and white livery of the Munich trains, the Nuremberg trains were to be painted a bright red with a thin white line under the windows.

Classified as the “DT1 Series” (where “DT” stands for “Doppeltriebwagen”, reflecting their two-car base set), an initial batch of 14 two-car sets was delivered to Nuremberg between 1970 and 1971, and after some light test runs to verify the state of the infrastructure (little testing was required for the trains themselves as the design had already been well-proven in Munich), the first section of the Nuremberg U-Bahn, from  Langwasser Süd to Bauernfeindstraße, opened on the 1st of March 1972 (a little less than six month after the opening of it’s “companion system” in Munich).

Another batch of nine 2-car sets was delivered in 1975 for the extensions from Bauernfeindstraße to Frankenstraße (wich had opened in summer 1974) and from Frankenstraße to Aufseßplatz (wich was opened in late september 1975), and another batch of seven two-car sets was delivered in 1979 to provide more rolling stock for the line’s extension to Weißer Turm, wich finally brought the U-Bahn into the city center of Nuremberg.

Thirteen more 2-car sets were delivered in 1980 for the line’s extension to Bärenschanze and to overall increase the number of available trains. Unlike the previous additional batches, wich were identical to the original trains delivered in 1970, using a camshaft contactor resistor control, this 4th batch was fitted with three-phase motors controlled by a “VCVF” system, a “very german” thing that is basically a thyristor chopper control working like an inverter, alas, instead of a “conventional inverter” (wich at the time were still only used on experimental rolling stock), wich varies both the voltage and the frequency (hence VVVF stands for “Variable Voltage, Variable Frequency”), a VCVF effectively functions like a chopper, varying the traction current instead of the voltage (VCVF indeed means “Variable Current, Variable Frequency) togheter with a set of six thyristors that switches the current to the three phases of the motor with the required frequency.  This system was developed in the late 1970s by Siemens and AEG as an improved alternative to the chopper control, wich was still bound to the usage of brushed DC-motors, wich do require a good deal of maintainance, by using three-phase motors instead. The VCVF control can indeed be considered a precursor to the modern VVVF control, unfortunately however it never saw widespread adoption outside (West) Germany, hence my previous moniker of “a very German” thing.

Back to Nuremberg, a fifth batch of seven three-phase 2-car set was delivered between 1981 and 1982 for the opening of the Line U1 extension to Jakobinenstraße station, in the nearby town of Furth – the first Nuremberg U-Bahn extension beyond municipal boundaries.

Finally, the sixth and final batch of DT1 Series trains, nine three-phase two-car sets was delivered in 1984 for the opening of the first section, between Plärrer and Schweinau of the long-awaited second U-Bahn Line: Line U2.

By then, VAG, the agency operating the U-Bahn had 64 two-car sets available at it’s disposal (29 three-phase ones and 35 camshaft resistor-controlled ones), more than enough to meet the further planned extensions.

In fact, it wasn’t until nine years later, in 1993, that VAG acquired new trains, purchasing twelve 2-car sets of a more modern desingn, classified as the DT2 Series, and derived by Munich’s Type B trains, wich had been designed in 1981 and had entered full-production after lenghty testing in 1987.

From the mid-1980s to the late 2000s, the DT1 Series trains lived a tranquil and uneventful life, with only small, minor modifications being made (such as the fitting emergency intercoms in all cars). From the early ‘2000s, some of the newer-batch trains began to be lightly refurbished and repainted into a red and white livery similar to the one of the newer DT2 Series trains, however this repainting wasn’t carried out en-masse, with a sizeable chunk of the fleet remaining in it’s original livery.

Things started to change for the DT1 Series around 2008, with the opening of Nuremberg’s third U-Bahn Line, Line U3 from Gustav-Adolf Straße to Maxfeld, sharing tracks with Line U2 between Rothenburger Straße and Rathenauplatz. Line U3 was revolutionary as it was built as Germany’s first driverless automated subway line, and plans were immediately drawn up to convert Line U2 as well to driverless operation.

After an unique period of coexistance between driverless U3 trains and driver-operated U2 trains, Line U2 was finally converted as well to driverless operation by the 2nd of January 2010.

Following the conversion, all manually-driven stock (both DT1 and DT2s) of Line U2 was transferred to Line U1, for wich the city had no plans to convert. However, with the DT1s having passed the 30 year service mark, replacement plans started to be drawn up.

Twelve of the oldest DT1 Series sets were immediately replaced by a small batch of fourteen DT3-F Series 2-car sets, a derivative of the driverless DT3 Series (both DT3 type trains were built by Siemens) but fitted with a driving cab, compatible with both driver- and driver-less operation.

The remaining DT1s soldered on for a few more years, until a new replacement was put forward, in the form of the 4-car articulated G1 Series trains, to be built by Siemens and based on the company’s widespread Inspiro platform.

Taking advantage of the new trains, VAG opted not only to replace the last remaining DT1s, but also the slightly newer DT2s as well, in order to have an uniform fleet on Line U1.

The first G1 Series train entered service in August 2020, and two years later, by the summer of 2022 enough sets were already in service to replace the older trains, wich were all taken out of service between July and August 2022, a few months after celebrating the Nuremberg’s U-Bahn 50th anniversary.

All DT1 Series sets are to be scrapped, except two two-car set (a 1975-built resistor-controlled one and a 1984-built three-phase one), wich will be fortunately preserved by VAG in operational condition for special trips on Line U1.

Trivia:
Thanks to the fact that Nuremberg’s DT1 Series and Munich’s Type A trains are largely identical and interchangeable, several occasions saw a Nuremberg train lent to Munich and vice-versa:
Between the 6th of August and the 11th of September 1972, Nuremberg lent four 2-car sets to Munich to provide additional capacity during the Munich Summer Olympics on Line U3, wich was to serve the Olympic venues.

Between March and September 1978 it was Munich’s turn, lending three 2-car set to Nuremberg as a stop-gap mesaure to provide rolling stock for the extension of Line U1 to Weißer Turm until Nuremberg’s ordered additional batch of DT1 Series trains could be delivered.

Once again, between the 28th of October 1978 and April 1979, Munich lent Nuremberg three 2-car sets to provide additional capacity during the congress of the German Evangelical Church (wich that year was being held in Nuremberg).

Nuremberg then returned the favour in 1980, lending Munich three 2-car sets on the 19th of November to provide additional capacity during the papal visit of Pope John Paul II to the bavarian capital, and finally, Munich lent four 2-car sets to Nuremberg between the 4th of October 2006 and the 14th of October 2008 to cover for out-of-service DT2 Series trains that were undergoing refurbishment.

One of the afromentioned Nuremberg DT1 Series trains in service in Munch during the olympic games.

The photo was taken from the Max-Valier Straße bridge over Ungererstraße, looking southwards. The line is Line U6, in the section between Freimann and Studentenstadt. The first bridge in the foreground is of the Münchner Nordring, a railway line built as a bypass for freight trains, wich however was used for passenger service during the olympics, with trains shuttling between Moosach and the temporary Munchen-Olympiastadion station, wich was built near the olympic venues. 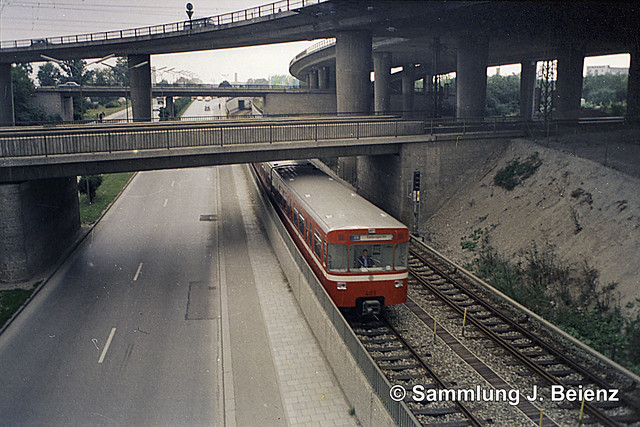 The last months of service for DT1 and DT2 Series trains on Line U1.

Note how Nuremberg retained the slow and cumbersome “umbilical cord” system for platform duties until the end, unlike Munich where it was quickly replaced by platform mirrors. Nowdays, the DT3-F and G1 Series trains no longer need to use that system as well as they’re fitted with side-wiew cameras.