Part of the Budd Metroliner pack – jump to the previous or next part. 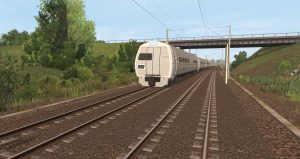 Upon it’s formation on the 1st of February 1968, Penn Central inherited the 50 Metroliner cars that were still undergoing testing at the time, and had not entered regular service yet due to several reliability issues. New problems had been found, such as arcing being commonplace due to the poor insulation of electrical equipment. Furthemore, after several catenary outages, due to the high currents drawn, when testing 8-car sets, the practical limit of Metroliners was found to be a 6-car formation. The majority of problems was concentrated on the Westinghouse-equipped sets, while the GE-equipped sets were a little better, thanks in part also to their superior pantograph design, however they weren’t entirely free of problems either.

Upon the transfer to Penn Central, the Metroliners kept their PRR-era livery, altough the distinctive “Keystone” mark was removed and replaced by large stickers with the black “PC” logo.

After many delays, regular Metroliner services between New York and Washington D.C. began on the 16th of January 1969, more than two years late compared to the original plans. The initial schedule, depsite the attractive running time of under 3 hours, was quite dire, with just one roundtrip being operated in the afternoon. The same problems encountered during testing continued to plague the Metroliners in regular service, with a sizeable part of the fleet remaining out-of-service.

Plans to speed up service to a 2 h 30 mins non-stop schedule between New York and Washington were made, however due to the poor track condition, as a result of lacklustre maintainance, of the North East Corridor, the Federal Railroad Administration imposed a 120 mph (190 Km/h) speed limitation on Metroliner sets. Depsite this, the Metroliners were still the fastest trains in regular service in North America.

Later that year, the eleven sets bought by SEPTA on behalf of PRR completed their testing, however Penn Central refused to accept them, due to their many issues. Furthemore, these eleven sets were found to be inadequate for the Keystone Corridor they were intended for, having (like all Metroliner sets) a lacklustre accelleration, they tended to overheat and struggled to climb the gradient out of Philadelphia Suburban station. Following their refusal, these sets were sent back to the Budd Company for improvements.

Due to their unreliability, and poor maintainance performed by Penn Central, out-of-service rates for Metroliner sets were estimated to be a staggering 40% in early 1970s.

At the time, Penn Central’s situation was extremely dire, with continous operating decifits, a staggering debt and a difficult managment. On the 21st of June 1970, Penn Central filed for bankrupty, and the company collapsed soon after.

To “rescue” passenger railway service in the United States, on the 1st of May 1971, Amtrak was formed, taking over all passenger trains still operating in the United States. To operate these services, Amtrak inherited a variegated fleet of passenger cars, locomotives and multiple units, including all the Metroliner sets.