Part of the Budd Metroliner pack – jump to the next part. 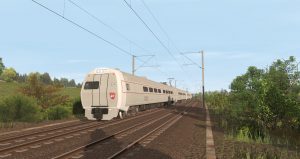 In the late 1960s, due to the competition of air travel and the private automobile, passenger trains in the United States were declining, falling behind their counterparts in the rest of the world, in Europe and primarily in France, where the SNCF had been running regular express services with a maximium speed of 200Km/h (125 mph) for quite some time, such as the Le Capitole between Paris and Toulouse, and in Japan, where the JNR had just inaugurated the Tokaido Shinkansen, world’s first high-speed railway line, with a maximium speed of 210Km/h (130 mph).

To implement similar high-speed railway services in the United States, as part of President Lyndon B. Johnson’s “Great Society” program, the High-Speed Ground Transportation Act was signed into law in 1965. This act granted substantial funding and the backing of the federal government for the introduction of an high-speed train service on the “North East Corridor” between Washington D.C. and New York City, the most densely populated area in North America.

Unlike in Japan, in the US building an entirely new line dedicated only to high-speed trains was seen as unnecessary, as the North-East Corridor was already electrified, quad-tracked (therefore with plenty of space for express services) and without any level crossings. Therefore, the efforts of the Federal Government (via the Department of Transportation) and the Pennsylvania Railroad, the owner of the line, concentrated exclusively on the technical specification and details for the new trains.

The Budd Company was tasked with manufacturing the bodyshell (using Budd’s signature stainless steel) and the “mechanical equipment”, such as the bogeys. The electrical equipment (pantographs, motors, traction control and others) would be provided by both Westinghouse and General Electric on a “per car” base (out of the initial order, the 20 chair cars were to be fitted with Westinghouse equipment, while the 30 snack bar and club cars were to be fitted with GE equipment). Both manufacturers’ equipments were desinged to be compatible with each other.

The cost of the initial order was split between PRR and the Federal Government, paying 10,4 and 9,6 milion dollars respectively. Later that year, 11 more sets (22 cars) were ordered to the Budd Company by the SEPTA, the South-Eastern Pennsylvania Transportation Authority, on behalf of the Pennsylvania Railroad, for use on the electrified Keystone Corridor between Philadelphia and Harrisburgh.

The basis of the new Metroliners was the Pioneer III experimental electric railcar, built in 1958 by Budd (on a request by the PRR) to test new technologies intended for long-distance services in the North-East. In 1963, a variant of the Pioneer III, adapted for commtuer services, nicknamed “Silverliner” was delivered in 55 units to the PRR and Reading Railroad, to operate Philadelphia commuter services on behalf of SEPTA. An additional four Silverliner cars were ordered by the US DOT and were adapted for high-speed services to test the infrastructure of the NEC before the entry into service of the Metroliners.

The first finished Metroliner sets began to be delivered to the Pennsylvania Railroad in 1967, commencing test runs under their own power later that year. However, the new trains were quickly found to be unreliable, with several faults and defects being found in evry test run. The issues were concentrated primarily around the electrical equipment, with the situation being particularily dire on sets fitted with Westinghouse equipment: the traction motors failed at speeds greater than 70 mph, the pantographs bounced around and damaged the catenary and the low-capacity transformers drew unsuitably high amounts of current. Another issue was found in late 1967, when a Metroliner set, passing by an older MP54 railcar at speed, ripped out the latter’s passenger windows due to pressure drop, a sign that older rolling stock might not mix well with newer high-speed trains. Depsite all the issues, on test runs the Metroliners reached a top speed of 164 mph (264 Km/h) near Pincerton Junction, making them the fastest trains in North America.

However, the mechanical and electrical issues with the trains were still persistent, with the official regular service date (originally announced for the 29th October 1967) being postponed multiple times, first to the 1st of January 1968, and later idefinitely, until the issues with Metroliner trains were solved.

Meanwhile, the financial situation of PRR was very difficult, with the company merging with it’s historical arch-rival, the New York Central Railroad (and the New Haven Railroad as required by the ICC) to form the Penn Central railroad in an attempt to regain stability. The merger was made official on the 1st of February 1968, with all the rolling stock of the three companies being inherited by Penn Central, including the brand-new Metroliner sets, wich by then were still undergoing testing, never having entered regular service under PRR.