Rocar was formed in 1951 as the “Tudor Vladimirescu Works” (named after the romanian revolutionary of the 19th century), a factory tasked with the production of trucks and agricultural machines such as combine harvesters and tractors. In 1955, the company produced the first fully-domestically-built romanian bus, the “MTD” (named after Mao-Tse Tung, the Chinese communist party leader), wich was basically a bus carbody mounted on a SR-101 truck chassis and assembly.

Mass production of the MTD, renamed as the TV1, began in 1956. Owning to the good result of the design, in 1957 it was decided to switch the main focus of the factory from agricultural machines to pubblic transportation, and in that same years, the first trolleybusses began to be built as well.

Production of the design was gradually updated in the following decades – the TV2 model was introduced in 1958 and production of the improved TV20 model started in 1967.

In 1971 the company bought a manufacturing license from the West-German MAN, and on that basis introduced the 112UD model in 1974, the same year the company was officially renamed from “Tudor Vladimirescu Works” to “Întreprinderea “Autobuzul” (quite literally, “Bus Enterprise”), reflecting the increasingly dominant position busses had on the factory production lines.

The 112UD was unfortuantely quite expensive to manufacture, thus in 1979 a cheaper alternative was introduced, the DAC 112, wich began to be built in various version, including single and articulated bodies as well as trolleybusses versions for both.

The introduction of the “DAC” family of busses unfortuantely coincided with the start of the infamous “Austerity”, a set of policies implemented by the communist government in order to quell the staggering pubblic debt the country had racked in the past decades. Imports were effectively banned (both from the western world as well from the rest of the eastern bloc) and maximium priority was placed on exports, leading to a serious drop in the quality of life (with constant shortages of almost any general goods, a serious decay in infrastructure and housing caused by the lack of pubblic spending and so on) as well as a sensible drop in manufacturing quality, to the point that most vehicles left the factory in quite a “crude” state.

Thus, depsite the relentless focus on exports by the government, DAC busses sold poorly on foreign markets. Numerous demonstrators were sent all over the rest of the eastern bloc, but very few order came, due to the fact that most of these countries could source busses from domestic manufacturers (Karosa, Ikarus, Jelcz and so on) wich almost always had higher-quality stuff available for the same or even a slightly lower price than the DACs. In the end, the DAC sold only to very few eastern-bloc countries and to politically-aligned third-world countries.

On the other hand, with imports effectively banned, on the domestic romanian market the DAC family of busses had become the de-facto standard, being onmipresent in all fleets with no exceptions.

After the 1989 Revolution, the company was privatized and subsequently renamed to “Rocar” in 1991. This unfortunately coinicided with a dire period for the company (and the country as a whole), as due to economic hardships, most domestic transportation companies couldn’t afford to make even the most minimal purchase, and (as proven in the previous decades) the DAC family of busses could hardly be marketed outside romania.
Hence, in the mid-1990s, Rocar signed a cooperation agreement with the DeSimon company, an Italian coachbuilding workshop. As part of the agreement, DeSimon provided Rocar with bodyshells for the U210 type busses, wich DeSimon had manufactured jointly with other companies as part of the Inbus consortium up until 1993, wich were to be mounted on Rocar-built chassis and powered by Rocar engines built under MAN license.

The result was the rather successful “U412” family of busses, wich sold over 400 units thruought romania between the mid-1990s and the early 2000s. However, depsite the good success, the U412 was unable to keep the company financially afloat, especially in the face of a relentless economic downturn (wich, for most transportation companies meant being able to afford only second-hand vehicles) and the arrival on the market of two competitors: Grivibus and Astra Bus, wich was a subsidiary of Irisbus.

In it’s last attempt to survive, Rocar tried to enter the emerging low-floor bus market by signing a collaboration agreement with yet another Italian company, this time Autodromo. The result of the agreement was the introduction of Rocar’s first, and unfortunately only, low-floor busses, the standard diesel U812 and the EA812 trolleybus, both of wich were license-built versions of Autodromo’s successful Busotto type. One unit each was built for each type, as a prototype and evaluation vehicle for further sales, both were put in service with Bucharest’s RATB.

Unfortunately, depsite very good results, neither type entered mass production due to financial issues and little interest from the cash-strapped transport companies. After the failure of a last-ditch attempt to a similar agreement with the polish Solaris, for the production of their Urbino bus, Rocar declared bankruptcy in 2002, ending all bus manufacturing later that year.
The company survived for a few months more doing repairs for it’s former producs, but definitiely ceased all activities in early 2003 and was liquidated by early 2004, ending a half-a-century long history.

A summer 1998 (english-language) interwiew with the then-general manager of Rocar, Gabriela Radu, about the then-current status of the company and possible future projects. 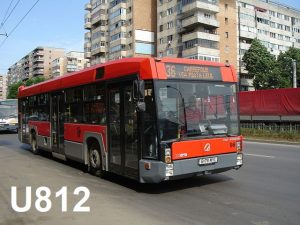 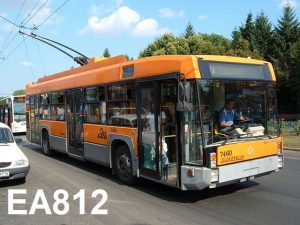