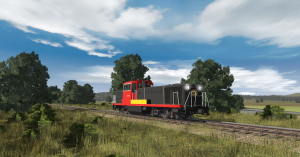 DE10 1104 is currently still in service as the Sagano Railway’s locomotive of choice, hauling five “Torokko” cars converted from 2-axle gondola cars. If DE10 1104 is not avaible for any reason (such as a fault, or more commonly, scheduled maintainance or overhauls) it will be replaced by another DE10, specially designated unit 1156, wich altought it’s fitted in the same livery as the former one, is owned directly by JR West rather than by the Sagano Scenic Railway itself.