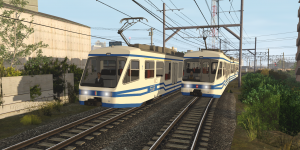 The low-floor ABe 4/6 electric multiple units were introduced on the Domodossola-Locarno Railway in the early 1990s, as part of a general modernization program of the line, thanks to it being included in the ambitious swiss “Rail 2000” program. Depsite being a local railway with relatively low traffic, the Domodossola-Locarno Railway was able to “pyggyback” on the Rail 2000 program (wich was mostly intended for the swiss federal railways, the SBB CFF FFS) due to it’s status as an international railway, thus securing conspicuous funds for it’s much needed modernization. Also at the same time, after years of decline, ridership on the line was increasing, and there was a need for new, modern trains to supplement and eventually replace the most dated trains in service.

The order for the first batch of new trains was placed by FART, the operator of the swiss section of the line, in 1991, consisting of six low-floor electric multiple units formed in 2-car sets to be manufactured by the Vevey workshops with components from SIG (wich provided the bogeys) and ABB (wich provided most of the electrical components). These initial six sets were intended for cross-border services and were to be funded 60% by the swiss federal government and by 40% by the government of the canton of Ticino. Soon, two more sets were added to the order, one (funded 31% by the federal government and 69% by the cantonal government) being intended for local services in the swiss section of the line, while the second one (entirely funded by the cantonal government) was intended to act as a spare set for the other seven.

Designated as “ABe 4/6” using the distinctively swiss rolling stock classification system*, the new trains were built in 1992 (for the FART units) and in 1993 (for the SSIF units), with the first units entering service in 1992.

The ABe 4/6s are formed of two nearly-identical cars, each fitted with one plug door set per side. The car on the “Domodossola side” is fitted with a toilet (to the right of the passenger doors) and a first class compartment (between the driving cab and the passenger doors), while the car on the “Locarno side” is only fitted with 2nd class seating. Depsite their looks, these aren’t articulated trains:  the “Locarno side” (2nd class-only) car is fitted with two bogeys, while the “Domodossola side” car (toilet) only has one, and is permanently attached to the other car via a shaft. This arrangment was derived from the Be 4/8 class trams of Bern, built by ABB and Duewag between 1989 and 1990, wich have provided most of the design elements for the first itterations of the ABe 4/6 ‘s design.

Both cars of an ABe 4/6 are fitted with single-arm pantographs, atlough only one is used in normal service. Traction control on these trains is provided by an ABB-made GTO-VVVF inverter wich controls four three-phase asynchronous motors fitted on the two “outer” bogeys (the central one is non-motored).

ABe 4/6s are rated for a maximium possible speed of 80Km/h, altough due to the tortuous nature of their line, their “practical” maximium speed is lower.

Among other “fancier” things, these trains are fitted with one CCTV camera per side, per car (four total) wich are used to “keep an eye” on passenger boarding and alighting at stations, and on the train’s immediate surroundings (such as checking that trees and other objects near the tracks do not exceed the loading gauge). These cameras (one at a time, per driver imput) convey the video recording to a small black-and-wite CRT TV screen fitted in the driving cab.

In normal operational conditions ABe 4/6 sets are operated in single-units, altough two trains can be often seen running coupled togheter during times of high ridership (such as during schooltime rush hours or high tourist season). Normally, except in special circumstances (such as breakdown assistance), SSIF-owned and FART-owned sets don’t run coupled togheter.

Thanks to their introduction, both SSIF and FART were able to reitre the most dated units in their fleet, namely the 1920s-vintage ABDe 4/4 railcars, and to displace a lot of older trains (such as the ABDe 6/6s and ABe 8/8s) to lesser services or “reserve” duties. Another perk of the introduction of ABe 4/6s was the drastic reduction in the need for passenger coaches, wich were added behind EMUs (in true swiss fashion) for the most crowded services. However this required a copious amount of shunting, as the Domodossola terminus was not equipped with an headshunt track (requiring thus the trains to go to the nearby depot, shunt there and get back to the station) while shunting spaces in Locarno have always been tight, especially before the construction of the current underground new station.

ABe 4/6s were predisposed from the start to be fitted with a third central car. This eventually happened in 2010 when four FART-owned sets (55 to 58), wich were sent for refurbishment to Bombardier and had a third car added. Reclassified as ABe 4/8 45 to 48, they re-entered service in september 2011 but they had to be retired soon after, due to a series of derailments involving these trains (with set no.41 being involved even twice!) and a plethora of other issues. After some urgent repairation works, the ABe 4/8s returned to service in March 2013.

As of today, seven “original condition” ABe 4/6s are still in service (FART units 52, 53 and 54 – unit 51 was destroyed in a fire in 2009 – and all SSIF units 61 to 64), plus the four refurbished ABe 4/8s. Thanks to their large number, wich dwarfs all other rolling stock classes in service on the line, the ABe 4/6s have ended up being the “poster train” for the Domodossola-Locarno Railway.
Thanks to their well-tought-out design, pleasant looks and good interior comfort, these trains are well appreciated by passengers, especially if compared to the subsequent Corifer-built “Panoramic” (not exactly) trainsets, over wich they’re advantaged thanks to a more spacious interior, larger windows and the low floor.

ABe 4/6s are also relatively well appreciated by drivers alike, thanks to their relaxed driving, good visibility (enhanced by the side CCTV cameras), good cab comfort, and good braking. However, in winter times, ABe 4/6s might be prone to wheelslip, due to their light weight, and thus, the older but heaver and all-motored ABe 8/8s are preferred. Conductors also appreciate the ABe 4/6s thanks to their low-floor entrance, wich makes the conductor’s job more simple and quicker, compared to the steep stairs of the “Panoramic” trainsets.

The air-operated doors of an ABe 4/6 have been described as “packing quite a punch when closing”.

An early sketch of an ABe 4/6 made by the Vevey works in 1988. The overall shape and arrangment for the train is more or less definitive – there will be only a few changes with the production version (namely the fitting of pantographs on both cars and the placement of the dot-matrix destination boards on the sides of the cars rather than on the front).

It’s notable that the train in this sketch is fitted in a livery arranged in a way nearly identical to the actual production trains, but with different colors: these are the orange and silver of the “VST-Einheitslackierung” (“VST standardized livery, where “VST” stands for the then-name of the Association of Swiss Pubblic Transport Companies), a standardized livery created in 1974 and intended to be fitted to all pubblic transport vehicles (with the exception of SBB CFF FFS trains and postal busses) of switzerland. 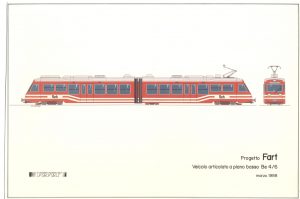