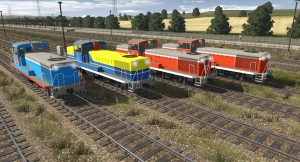 From left to right: TDE11 and TDE10s in the blue-yellow, red and JNR-style liveries.

These were acquired in 1984 upon the formation of the Tarumi Railway, wich inherited the Tarumi Line from JNR. Five units were acquired, with four being reclassified as “TDE10s” and one as a “TDE11” as it had undergone modifications that made it similar to JNR heavy-duty DE11s (also derived from DE10s).

Initially, the TDE10s were fitted in the standard JNR red and gray livery for diesel locomotives, wich was soon modified with “V”-shaped decorative white lines on the front and the cab sides. TDE102 was later repainted in a flashy dark blue and yellow livery with a thin pink line, while the sole TDE11 unit was repainted in a distinctive pleasant light blue livery.

In 2006, with the discontinuation of freight services, the fleet of TDE10s suddently became unemployed, and with the distinctive peak hour passenger services not enough important to justify maintaining a fleet of diesel locomotives, all TDE10s and the single TDE11 were retired and later scrapped in April 2007.