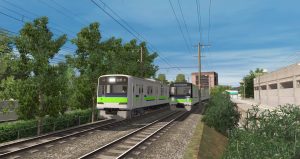 Note: since there are no prototypical 1372mm tracks for trainz, i’ve fitted these trains with 1435mm bogeys, for the obviously more commonly available standard gauge tracks. In any case the difference is hardly noticeable to the naked eye – just 63 millimeters!

The 10-300 Series was introduced by Toei Subway in the early ‘2000s as a replacement for the oldest batches of the 10-000 Series (wich had been built in the late 1970s, plus one prototype set built in 1971), wich after 25 years of intense usage had seriously deteriorated, and among other things, the fitting of the new D-ATC system (wich was to replace the old analogue ATC system in use since the opening of the line) was considered uneconomical.

To contain costs and to expedite production as much as possible, Toei decided to base the Shinjuku Line’s new trains on JR East’s successful E231 Series design, wich was then entering mass production.
As much components and design fetaures were taken directly from the E231 Series, among those the stainless steel bodyshell design, doors, IGBT-VVVF traction inverters, air conditioning units and the TIMS self-diagnostic system. The bodyshell cross-size, while not directly derived from the above-ground E231 Series (due to loading gauge limitations) was nonetheless the same as several other E231 Series derivatives wich were being built at around the same time (among these, the Tokyu 5000 Series and the Tozai Line-trough service E231-800 Series).
The only thing not taken directly from the E231 Series were the bogeys – the only thing that had to be custom-designed due to the Shinjuku Line’s peculiar and unusual 1372mm gauge – and the design of the front FRP mask.

Manufactured by Tokyu Car (with some intermediate cars assembled by JR East’s Niitsu works!), an initial batch of eight 8-car sets and four 10-car sets (plus eight cab cars to form four 10-300R Series sets using surplus 10-000 Series intermediate cars) was delivered between 2004 and 2006, with the first trains entering revenue services on the 21st of May 2005, both on Shinjuku Line-only services and on trough-services with Keio Railway as well.

A few years later, in 2010, Toei announced that as a mesaure against overcrowding (the Shinjuku Line is the third most heavily utilized subway line in Tokyo, behind the Tozai and Chiyoda Lines of Tokyo Metro) all Shinjuku Line trains were to be lenghtened to 10-car trains. To this end, in 2013 an additional batch of 10-300 Series trains was ordered, for a total of three 10-car sets (to replace an equal number of older 10-000 Series 8-car sets).
Instead of continuing production of the existing 10-300 Series design, Toei took advantage of the rolling stock technology developments that had occurred in the mean time, and in the end opted for an entirely new design, still derived from JR East rolling stock, but of a much newer series, specifically the E233-2000 Series introduced in 2009 for subway trough-services between the Chiyoda Line and the Joban Line (and the Odakyu Odawara Line as well).

The new batch of 10-300 Series trains was completely different from the older ones, to the point that it can be considered an entirely new series: the bodyshell was redesigned, a completely new livery was made (wich among other things fetaured “wing-like” designs around the doors to express a sense of speed), new components were installed, such as an updated TIMS system and the same IGBT-VVVF inverters of the E233 Series and finally the front FRP mask was changed, deliberately using an entirely different design to denote that these were “new” trains (taking in mind also the fact that at the time the Shinjuku Line had one of the highest average rolling stock age out of all Toei subway lines).
For maintainance simplification purposes, the only thing that was not changed between batches were the bogeys and the single-arm pantographs.
The 3rd batch trains entered revenue services on the 15th of September 2013, being used interchangeably with the earlier batches and 10-000 Series trains on both non- and trough-services.

Finally in 2021, the first 6th batch trains started to be delivered. These eight 10-car sets will be used to standardize the Shinjuku Line fleet to 10-car sets, finally reaching an objective set a decade earlier.
These will be replacing the earlier 1st and 2nd batch 10-300 Series 8-car sets on a train-per-train base, with surplus rolling stock being scrapped, a process that it’s currently ongoing.
Scrapping trains that are barely 15 years old and perfectly functioning (all of the retired 8-car sets are being moved to Keio’s Wakabadai depot, where the scrapping takes place, under their own power!) is certainly wasteful, however it seems it can’t be helped, as Toei has made clear that an eventual lenghtening of these trains, while cheaper upfront, will be rather difficult and costly, as (unlike more recent stock) several modifications will be needed to existing sets to accomodate additional cars, possibily driving final costs higher than the simpler purchase of a new train.

Unfortunately, there’s also almost no chance of any local railway purchasing second-hand 10-300 Series stock for several reason (of wich the peculiar gauge isn’t one, this being proven by the plenty of ex-Keio 5000 Series stock still in service for various local railways): among other things, their design makes very difficult converting a train to a suitable 2-car set, forcing a minimium theoretical formation of three cars, something that it’s already beyond reach for most local railways due to platform lenght (on most of these such railways, 20m-type 2-car trains already pose several limitations, let alone three-car sets), and those who can purchase 20m stock are almost always subsidiaries of major private railway, meaning that they already have another well-established (and cheaper) source of rolling stock. Furthemore while it’s true that these are technologically up-to-date trains, they might be even a tad too much sophisticated for local railways, hence most such railways opting for far older but simpler second-hand trains.

Finally, this is unfortunately not out of the norm for Toei stock – unlike Tokyo Metro (wich has plenty of trains), Toei uses it’s own rolling stock extremely intensively, meaning that by the end of it’s career, it’s almost always deeply worn-out, to the point that purchasing it makes no economical sense – another example is the Asakusa Line 5300 Series: built starting from 1991, it could’ve been a good option for the plenty of 1435mm gauge rural railways, but no purchase was made.
In this case, the exception that confirms the rule is the 6000 Series, wich is still currently the only Toei subway train to have seen second-hand usage (in any degree) – this being almost a one-time-only stroke of luck, as they were cheaply and readily available air-conditioned trains in an era where air-conditioning was still considered a luxury for most local railways.

At any rate, in the near-future, when the standardization to 10-car sets of the Shinjuku Line will be completed, the 10-300 Series will be formed by the four 10-car 1st and 2nd batches (wich, unlike the 8-car sets, will remain in service for the forseeable future) and twenty-three 10-car sets subdivided between the later batches.
As of today, all 10-300 Series trains are operationally-speaking identical, being used seamlessly on both Shinjuku Line-only services and trough-services with Keio Railway, on both local and express trains to Hashimoto on the Keio Sagamihara Line. Some additional services are operated infrequently on holidays or during events to Takaosanguchi on the Keio Takao Line (via the Keio Line), to Tama-Dobutsukoen (serving the namesake Tama Zoo) on the Keio Dobutsuen Line and to Fuchukeiba-Seimonmae (serving the Tokyo Racecourse) on the Keio Kebajo Line.

Trivia:
Among other things, the data transmission of the TIMS system was considerably sped up between the early and later batches, going from 2.5 MBps (for the mid-2000s trains) to 10 MBps for the mid-2010s batches.