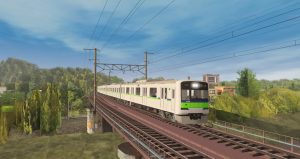 These quirky trains were introduced on the Shinjuku Line around 2005, and they were an odd side-effect of the ongoing conversion of the line’s signalling system fron an old 1970s analogue ATC system to a modern D-ATC system derived from the one JR East was then implementing on the Yamanote and Keihin-Tohoku Lines.

At the time, the Shinjuku Line fleet was formed exclusivley by 10-000 Series trains, built in various batches between 1978 and 1997 (plus a prototype set built in 1971), and with the oldest batches rapidly ageing after 30 years of intense services, Toei was planning to replace them with newer trains- these being the 10-300 Series derived from JR East’s successful E231 Series design.
A further reason for the replacement of the early batches was the necessity to retrofit D-ATC equipment, an expensive operation that had no sense on nearly life-expired rolling stock.

However, not all cars in the early-batch sets were of the same age: two cars in each set were slightly newer (almost a decade younger), having been introduced when the Shinjuku Line fleet was extended from 6 to 8-car sets in the late 1980s.
Hence, Toei decided for an unusual solution: to re-use the intermediate cars and mix them with newly-built cab cars in order to form a handful of additional sets at a relatively low cost.
This was the birth of the 10-300R Series, where the “R” stood for “Repair” and “Reconstruction”: six bona-fide, unmodified 10-000 Series cars sandwitched between two cab cars newly-built to the 10-300 Series design, and modified very little except for the bare minimium necessary to make them electrically compatible with the older cars. Evrything else remained mostly intact, including the armature chopper traction control – given that the cab cars are unpowered in the standard Japanese EMU design, no traction system change was deemed necessary.

In total, 12 new cab cars were ordered by Toei, built by Tokyu Car Corporation, delivered starting in 2005 and entering in service gradually between September 2005 and December 2006, an average of one evry two months.
Toei had calculated that it needed three 10-000 Series formations to extract the six intermediate cars for a 10-300R Sets, with the eventual plan being to use all 18 1st and 2nd batch sets (plus two spare cars from the prototype set), however, this couldn’t be done immediately: since it was found out that armonic interferences from the 10-300 Series’ inverters interfered with the ATC system, the newer trains couldn’t operate until the whole line’s system was switched to D-ATC, hence Toei had to keep in service the older trains longer than anticipated.

In the end, Toei opted to initially tempoarily replace the cab cars only of the older-batch sets, leaving in place the equally old intermediate cars, with their distinctive old-fashioned 4-section windows, a stark contrast to the adjacent Shin-Keiretsu-Densha derived bodyshell of the newly-built cab cars.
The signalling system was finally switched to D-ATC on the 14th of May 2005, and one week later, on the 21st of May, the 10-300 Series finally entered regular services on the Shinjuku Line. Within a couple of years, enough of the new trains were available to replace the surviving early-batch 10-000 Series sets. With the retirement of the early sets, finally enough later-batch additional cars were available, with the 10-300R Series being subsequently reformed into the formation it was initially meant to be – only later-batch intermediate cars only.

From then, the story of the 10-300R Series went on relatively uneventful for about a decade, until the mid-2010s: by then, with the overgcrowding of the Shinjuku Line becoming an increasing issue, Toei started to lenghten all trains from 8 to 10-car sets. Since it made no sense to lenghten them with other 10-000 Series surplus intermediate cars, nor re-use the cab car with newly-built intermediate cars of a similar design, the 10-300R Series ended up being shortlisted for replacement, togheter with the rest of the 10-000 Series fleet.
With the introduction of the 4th batch 10-300 Series in 2015, the replacement of the 10-300R Series began, and was completed by early 2017, with the last run of a 10-300R Series set on the Shinjuku Line on the 3rd of February.