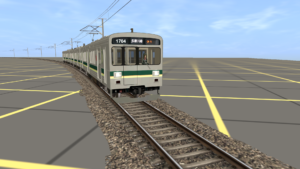 In 2013 Tokyu abandoned inter-running services on the Hibiya Line in favour of the newly opened Fukutoshin Line. This resulted in a massive surplus of 1000 Series cars, of wich many were reformed into 3-car sets and transferred to the Ikegami and Tamagawa lines to replace the 7700 Series and the 7200 Series, wich were completely retired by 2018 and 2016 respectively.
Many of the former inter-running cars were refurbished starting from 2014: re-numbered “1000-1500 Series”, their main modifications were the replacement of the inverter with an IGBT-VVVF type and the livery change from Tokyu’s distinctive red to a dark green, similar to the one in use by the New 7000 Series train (wich ran on the same Ikegami and Tamagawa Lines).