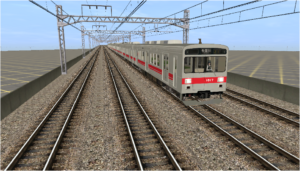 Upgrading the Hibiya Line fleet (and minor lines too).

By the mid-80s, while Tokyu railway’s two mainlines (the Toyoko and Denentoshi lines) had relatively modern rolling stock, the roster for Hibiya Line trough-services wasn’t really changed since the early ’60, when trough-services first began. This reflected the situation on the Hibiya Line as a whole, with TRTA and Tobu still running 3000 and 2000 Series train respectively, togheter with Tokyu’s 7000 Series, all of wich were designs of the early 1960s.

Therefore, in 1988, each of the three companies put foward it’s own design to replace it’s own part of the Hibiya Line fleet. TRTA was the first with it’s 03 Series (based on the earlier 01 and 05 Series of the Ginza and Tozai Lines) wich entered service in the same year, followed by the 20000 Series of Tobu railway shortly after, and finally Tokyu, with it’s 1000 Series.

A cheaped-out train… with a surprise up it’s sleeve.

To contain costs (and time), the 1000 Series was very closely based on the 20m-long 9000 Series for the Toyoko and Oimachi lines introduced in 1986: it was essentially a shortened-to-18m-with-three-doors-instead-of-four version of the former.

Depsite all the cost-cutting and “cheaping out” mesaures, Tokyu’s 1000 Series had an advantage over the two other Hibiya Line “new trains”: while designed in the same year the TRTA 3000s and Tobu 20000s were equipped with a chopper traction control, wich was up-to-date in the 1980s, but was about to be made obsolete by the brand-new inverter traction control, wich was already in use on Tokyu’s 9000 Series and was therefore inherited by the 1000 Series.
Of the GTO-VVVF type and manufactured by Tokyo Denki, it’s distinctive “screaming” sound is a fetaure of the 1000 Series.

The first 1000 Series trains entered service in 1991, formed as 8-car sets and used both on inter-running or above-ground only duties on the Toyoko Line. Some sets were also formed as 4+4 car ones, with the two central KuHa cars being of the symmetrical walk-trough type (rather than the 1000’s asymmetrical cab), this was made so in case of necessity, an 8-car set could be temporarily split and transferred to other lines.
Depsite it’s main purpose being that of an inter-running train, a few 1000 Series trains formed in 3-car sets were also introduced on the Ikegami line in 1993, to replace the 3000 Series and it’s variants of pre-war design, but this mesaure was relatively costly, so Tokyu choose to refurbish and convert to inverter control some of the displaced 7000 Series trains. Re-named “7700 Series”, they entered service in 1987, replacing all of the pre-1960s stock by the mid-1990s.
One 4-car set (altough not part of the 4+4 sets) was also used provisionally on the Mekama Line* in 1991.

In 2013 Tokyu abandoned inter-running services on the Hibiya Line in favour of the newly opened Fukutoshin Line. This resulted in a massive surplus of 1000 Series cars, of wich many were reformed into 3-car sets and transferred to the Ikegami and Tamagawa lines to replace the 7700 Series and the 7200 Series, wich were completely retired by 2018 and 2016 respectively.
Many of the former inter-running cars were refurbished starting from 2014: re-numbered “1000-1500 Series”, their main modifications were the replacement of the inverter with an IGBT-VVVF type and the livery change from Tokyu’s distinctive red to a dark green, similar to the one in use by the New 7000 Series train (wich ran on the same Ikegami and Tamagawa Lines).

*The Mekama Line was split into the Meguro and Tamagawa Lines when inter-running services with the Namboku and Toei Mita lines began in 2000.