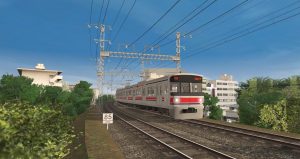 The 3000 Series was introduced by Tokyu Corporation at the very end of the 1990s in preparation for the commencment of trough-services between both the Toei Mita and TRTA Namboku subway lines and Tokyu’s new Meguro Line, wich was the result of a re-organization and split of Tokyu’s Mekama Line, wich once ran from Meguro to Kamata.
The busiest portion of the Mekama Line, between Tamagawa and Meguro (where trains would’ve continued onto the two subway lines) became the Meguro Line, and was further extended westwards to Hiyoshi along the Toyoko Line, while the remainder of the Mekama Line, from Tamagawa to Kamata became the Tamagawa Line, wich was to be operated by 18m 3-car trains in a way similar to the Ikegami Line.

Original plans called for an adaptation of the existing 9000 Series, however, it was soon discovered that they might have been a bit too underpowered to effectively tackle both the Mita and Namboku Lines’ steep gradients, and furthemore, various tests proved that 9000 Series trains didn’t fare well in ATO operation (as was planned to be used on both lines) either, due unresponsive braking, wich made aligning with platfom screen doors particularily difficult. Since adapting the 9000 Series was considered to be too complex and costly, Tokyu Corporation opted instead for an entirely new design, also taking into account the fact that by then, the 9000 Series design was already 15 years old.

Tokyu Car Co., Tokyu Corporation’s in-house rolling stock manufacturer, to wich all orders were made by default, took the chance of the new trough-service trains to considerably review and upgrade it’s design praxies, wich for a long time had remained solidly anchored to a few “traditional” principles.
The new trains took advantage of all the newest rolling stock technology had to offer, with the stainless steel bodyshell being based on the revolutionary 209 Series’ one (wich among other things, had been and was still being manufactured partly by Tokyu Car itself), albeit with many components carried over from the older trains (such as the doors and windows).
Another major change was the ditching of Tokyu’s distinctive “vertical-flat-front” style (something wich had been a staple since the 8000 Series of 1969 and even before) in favour of a pleasant FRP front mask, taking advantage of the fact that ATO equipment needs additional space.

Overall, the new trains resulted in a funny mix between Shin-Keiretsu-Densha type trains and Tokyu’s old 9000 Series – a “missing link” of sorts – with a sparkle of fetaures taken from both Toei’s Mita Line 6300 Series and TRTA’s Namboku Line 9000 Series, in order to ensure the least amount possible of compatibility-related issues.

Classified as the 3000 Series, the first of Tokyu’s new trough-running trains, Set 3001, was completed ahead of time in March 1999, and after a few test runs, it provisionally entered revenue service on the Toyoko Line on the 16th of April 1999, formed as an eight-car set (of wich, six cars were the proper ones of Set 3001, while the other two were intermediate cars “borrowed” from Set 3002, the rest of wich was still under construction).
The remaining 11 out of 12 ordered sets (3002 to 3012) were completed and entered service, togheter with set 3001 (wich had been withdrawn from the Toyoko Line on the 15th of January), on the 6th of August 2000 – the same day when Mekama Line services were officially split into the Meguro and Tamagawa Lines.

Trough-services with both the Toei Mita Line and the TRTA Namboku Line officially began on the 26th of September 2000, when the two lines were extended along a shared section to Meguro, with Tokyu’s 3000 Series trains now running on both subway lines, to either Nishi-Takashimadaira on the Mita Line or Akabane-Iwabuchi on the Namboku Line. The “area of operations” further expanded in 2001 with the opening on the 28th of March of the Saitama Rapid Railway, a 14.6Km-long northwards extension of the Namboku Line to Urawa-Misono in Saitama prefecture, with Tokyu Corporation ordering an additional 3000 Series set (3013, delivered on the 23rd of March 2001) to increase the number of available trains.

Since the start of trough-services with the two subway lines, the service life of the small, but hard-working thirteen 3000 Series sets has been relatively uneventful, until a few years ago, when Tokyu announced that all 3000 Series sets, will be refurbished and lenghtened to eight cars in preparation for yet another trough-service, this time with Sotetsu Railway, via the under-construction Tokyu Shin-Yokohama Line.
Thus, depsite having just passed 20 years of age, the 3000 Series will continue to run over the Tokyu network and not only, continuing from Saitama to Kanagawa prefecture over subways, rapid and major private railways!

Currently, all thirteen 3000 Series are in service, and are used interchangeably with the newer 5080 Series, the specialized Meguro Line variant of Tokyu’s 5000 Series family, on local and rapid services over the Tokyu Meguro Line, the Toei Mita Line (to Nishi-Takashimadaira), the Tokyo Metro Namboku Line and the Saitama Rapid Railway (to Urawa-Misono). When the Shin-Yokohama Line will open, Tokyu’s 3000 Series will continue beyond Hiyoshi to either Ebina (on the Sotetsu’s Main Line) or to Shonandai (on the Izumino Line)

Trivia #1:
The 3000 Series was designed with the overall concept of “a beautiful train that is kind and polite with evrything” in mind.

Trivia #2:
During it’s brief, temporary, service life on the Toyoko Line, set 3001 was mostly used for rapid services, but sometimes it could be seen also on local services as well, such as in case of a schedule disruption or a lack of rolling stock.

Trivia #3:
With the commencment of trough-services with the Saitama Rapid Railway, for the first time in history a Tokyu Corporation train could be seen in Saitama prefecture.