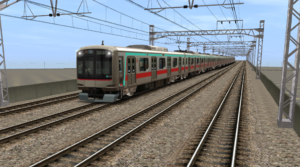 The Tokyu 5000 series was first introduced in 2002 on the Denentoshi line (light green), to supplement and partially replace the 8000 and 8500 series trains.
They were based on JR East’s 209 and E231 series designs, wich were manufactured at Tokyu’s own factory, Tokyu Car Corp. (now J-TREC).

Initially formed in 10-car sets with only 4-door cars, between 2005 and 2007, two middle cars of each set were replaced by 6-door cars, and starting from 2015 the 6-door cars are being replaced again by newly-built 4-door cars.

They are based at Nagatsuta Depot.