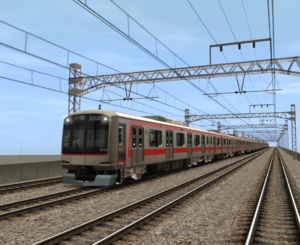 The 5050 series was introduced on the Toyoko line in 2004, to replace the 8000 series, supplement the 2000 and 9000 series and to increase capacity, due to the start of inter-running services on the newly-opened Minatomirai line.

They are formed in 8-car sets, based at Motosumiyoshi Depot.

The 5050-4000 (original model by Rizky_Adiputra) was introduced in 2011 ahead of the start of trough-running services onto the Tokyo Metro Fukutoshin Line.

On 16 March 2013, the 1.4-kilometer section between Shibuya to Daikan-yama was replaced with an underground connection to the Tokyo Metro Fukutoshin Line. The original ground-level terminal platforms were closed after the last service at 1 am that morning. Just four hours later, at 5 am, trains began calling at a new set of underground platforms adjacent to those previously served only by the Fukutoshin Line. During this time, 1,200 workers shifted the track alignment at Daikan-yama Station along a pre-built incline, a notable engineering feat.