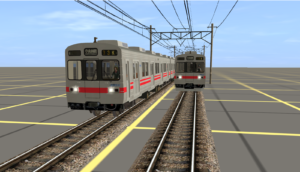 At the same time as the 8090 Series trains were put into service, the MinatoMirai Line project was brought forward jointly by Yokohama City and Tokyu Railway. The all-underground subway-like line was to serve the MinatoMirai development area, providing trough-service with the Tokyu Toyoko Line.
This proved to be quite a considerable problem for Tokyu Railway, as it’s newest trains, the 8090 Series, couldn’t be used on the new line: evry train running on subway or underground subway-like lines is required by Japanese Law to have (among other fetaures) a front emergency escape door, wich the 8090s lacked.

To solve this problem, Tokyu started the production of a modified version of the 8090 Series. Using the same bodyshell, but with the required front door, the 8590 Series entered service in 1988. This time, it was to be part of the 8500 Series family (itself also derived from the 8000 Series).
Actually, only cab cars were produced: a total of 10 (enough for 5 sets). The necessary 30 intermediate cars (6 + 2 cab cars per 5 sets) were obtained by an extensive re-formation of the 8090 Series fleet, wich resulted, among other things, in a 8090 Series set being reduced to 5 cars and moved to the Oimachi line and a conspicuous surplus of cab cars, wich remained stored at Tokyu’s Nagatsuta depot for a while.

Time goes on, but the Minatomirai Line isn’t ready yet…

In the mid-1990s, the whole 8090 Series fleet underwent the change of it’s front windows, from a wide single one to three smaller ones (similar to the ones on 8590 Series trains) wich were easier to change if they were damaged.
At the same time, following the introduction of the actual 9000 Series and a Toyoko Line timetable change, another couple of 8590 Series sets became surplus. These were lenghtened to 10-car sets in 1997 and transferred to the Denentoshi Line, running Subway trough-services (TRTA’s Hanzomon Line) as well, a first for the 8090/8590 Series family. Among the other things, they were also fitted with the round “K” sticker, wich indicated that these trains were not equipped with a radio compatible with Tobu railway’s one, and thus were barred from running on the Tobu network.

When the Minatomirai opened in 2004, Tokyu had already been carrying out a massive replacement of rolling stock with it’s new 5000 Series. The 8590 Series did actually ran on the MinatoMirai line as it was intended, but only for a very short time: 2 years.
By 2006, both the 8090 and the 8590 Series trains on the Toyoko line were displaced by 5050 Series trains and transferred to the Oimachi Line, just like what happened to their predecessors in the 1980s.