All the necessary dependencies are either included in the pack or are avaible on the DLS. Dependencies not mine belong to their respective authors.

The Tokyu 9000 Series was introduced in 1986 to replace the last remaining 18m-long stock (the 7000 and 7200 Serieses) in service on the Toyoko Line (with the exception of sets assigned to inter-running services with the TRTA Hibiya Line wich, due to loading gauge issues, had to keep the old 18m-long trains).

The new 9000 Series was revolutionary in many ways: it was one of the first major orders for inverter-controlled rolling stock (earlier, in 1983, Tokyu had tested Hitachi-made inverter control equipment on a withdrawn 6000 Series car), and was also Tokyu Corporation’s first train with an asymmetrical cab design, far more comfortable for drivers and conductors alike, instead of the old and relatively cramped “symmetrical” cab design of previous trains.
The 9000 Series was also designed to be as cheap and fast to be manufactured as possible, hence the simplicistic box-like shape. The lightened stainless steel construction of the 9000 Series was also based on it’s predecessor: the unlucky 8090 and 8590 Serieses.

A pre-series set, 9001F was completed in 1985 (with the manufacturer being obviously Tokyu Corporation’s own Tokyu Car Co.) and entered service on the 9th of March 1986. Follwoing the good results of this first set, mass-production of the 9000 Series began in 1987 and ended in 1991 after 117 cars were made.

These 117 cars formed fourteen 8-car sets for the Toyoko Line, assigned to Motosumiyoshi Depot, and a lone 5-car set (9007F) for the Oimachi Line (to replace old stock on that line too), wich had assigned to Nagatsuta Depot (wich primarily serves the Denentoahi Line) as the Oimachi Line has no depots of it’s own.

In 2004, with the opening of the Minatomirai Line, 9000 Series trains extended their service on the new line, all the way down to Motomachi-Chukagai. In the same year, all the Oimachi Line trains (including set 9007F) were repainted in a new livery with the soon-to-be iconic yellow and orange front “gradation” band – the new livery was designed to avoid passenger mistaking trains in the section (between Futako-Tamagawa and Mizonokuchi Stations) where Denentoshi Line and Oimachi Line trains share the same tracks.

Starting from 2009, the 9000 Series trains began to be replaced by the 5050 Series. This was made in preparation for the opening of the link between the Fukutoshin Line and the Tokyu Toyoko Line: the 9000 Series was incapable of inter-running services as it hadn’t the necessary equipment; earlier attempts at a conversion or retrofitting proved to be problematic.

Therefore, by 2013, all 9000 Series trains had been retired from the Toyoko Line, shortened to five cars, repainted and moved to the Oimachi Line, where they joined Set 9007F. Surplus cars were demolished or kept as spare-parts donors.

Almost identical in design to the Toyoko Line 9000s, just three 10-car sets of the 2000 Series were manufactured: their aim was in fact to increase the capacity of the Denentoshi Line, rather than to replace any old stock. As such, Tokyu reckoned that an entirely new design was unnecessary, thus the new 2000 Series trains were designed to be as close as possible to the 9000 Series: this also helped with maintainance, as the 2000s and 9000s shared almost all spare parts.

Furthemore, unlike the 9000 Series, the 2000 Series had to be designed from the start with inter-running services in mind, as (already back then) all Tokyu Denentoshi Line services were inter-running trains with the TRTA Hanzomon Line. But being a relatively small fleet, Tokyu didn’t deem necessary or even convenient having to to train Tobu Railway’s drivers and conductors, or even to install Tobu’s proprietary ATS equipment on the 2000 Series (a necessary requirement for inter-running services), meaning that the 2000 Series couldn’t operate on the Tobu Iseaki Line (the other line having trough-services with the Hanzomon Line)
As such, for all their service life on the Denentoshi Line, 2000 Series trains bore a well visible “K” sticker on the front, indicating that they were a Tokyu-only compatible train.

With the introduction of the 2020 Series in 2018, the three 2000 Series sets were displaced, shortened to five cars, repainted and sent to the Oimachi Line, where they joined their older relatives, the 2000 Series. Among other modifications, the 2000 Series trains’ inverters were changed from the Hitachi GTO-VVVFs to Mitsubishi Electric IGBT-VVVF with SiC components.
One year later, in 2019, Tokyu decided to reclassify the 2000 Series: to avoid confusion with the recently-introduced 2020s, the older trains were renumbered in the 9000 Series, becoming the “9020 Series”.

As of today, after the retirement of the 8090 and 8590 Serieses, all Oimachi Line local services are run by the 9000 and 9020 Serieses, wich make a total of eighteen 5-car sets; in other words, all 9000 and former 2000 Series sets are still in operation, altough shortened.

The 9000 Series had originally been designed also for inter-running services with the Toei Mita and TRTA Namboku Lines, wich were to connect to the Meguro Line (then still called the “Mekama Line”). As such, the 9000 Series shares a good deal of similarities and design choiches to the almost coeval Toei 6300 Series and TRTA 9000 Series.

Unfortunately, these plans were changed when it was discovered that the 9000 Series might not have been enough powerful for the two subway lines’ steep gradients and the brakes weren’t enough responsive, leading to difficulties in alignment to the platform screen doors while running in ATO mode. Instead of having to convert and to adapt the trains, Tokyu Corporation decided to introduce an entirely new design for inter-running services: the 3000 Series.

Originally, the “9000 Series” designation was to be assigned to the would-be 8090 and 8590 Serieses. This was later changed as both serieses were technically-wise almost identical to their predecessors: the 8000 and 8500 Series.

The 2000 Series was Tokyu Car Co.’s last train built using the company’s traditional “50 Years lifespan” mindset. In subsequent manufacturing, the company choose to adopt a system akin to JR East’s “half the cost, half the weight, half the lifespan” one.

A series of early/mid-80s design proposals for the 9000 Series from Tokyu Car Co. Note the wrap-around windows and the top-mounted taillights – both ideas will later be abanoned. (source) 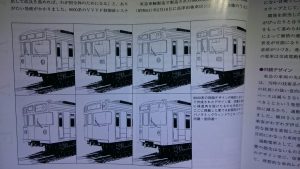