Final part of the “Bayerischer U-Bahn pack” – jump to the previous part. 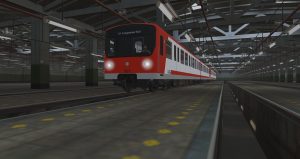 The DT2 Series was introduced by VAG in the early 1990s to provide new trains for several recently-opened extensions, primarily the northwards Line U2 extension from Hauptbahnof to Rathenauplatz and Schoppersof, with construction underway for it to reach the airport in the north of the city.

Following the same system that had been used for the trains for the system opening in 1972, as a way to reduce costs VAG ordered the same trains that were being delivered to the Munich U-Bahn at that time, namely the second-batch Type Bs, a rather modern design that had been introduced in 1981 and entered full-production in 1988, wich however still retained several design fetaures from it’s predecessor, the Type A, and by extension the DT1 Series Nurnberg had been using since the opening of the U-Bahn.

Manufactured by MAN, a total of 12 2-car sets was delivered to Nuremberg between 1993 and 1994. These differed little from their Munich counterparts, with the few notable differences being in the livery and primarily the interiors: unlike Munich, whose Type B trains used the same exact interiors as the Type As (with the only exception being the upholstery colour!), Nuremberg demanded instead a complete redesign of the interiors, ending with a much more modern-looking, but far less fancy design, derived from the one of the Class 480 of the Berlin S-Bahn.

Otherwise, the bodyshell, bogeys, cab and VCVF control remained the same as the Munich Type B trains.

After their introduction, the DT2s were used interchangeably on both Lines U1 and U2 until early 2010: with the latter’s conversion to a driverless system, the DT2 trains were confined to Line U1, where they continued to run until the 2020s: as VAG proceeded for a full replacement of the 1970s DT1 Series fleet with 21 Siemens Inspiro-derived G1 trains, it exercised a contract option for six more sets, as a replacement for the DT2 Series, in order to standardize the fleet of Line U1 to a single train type.

With the G1 Series fleet fully delivered, both the DT1 and DT2 Serieses were simultaneously retired from the Nuremberg U-Bahn in August 2022. Unfortunately, unlike with the DT1 Series, VAG has no plan to preserve any DT2 series car.

Since the Berlin S-Bahn shares the same general loading gauge and dimensions as the Munich and Nuremberg U-Bahns, with the transfer of S-Bahn operations in West Berlin from the East German* Deutusche Reichsbahn to the West-Berlin BVG in 1984, the introduction of Type B trains (or a derivative with minor modification) as a replacement for the pre-war era dilapdated rolling stock was seriously considered, altough it was later curtailed in favour of a custom-built train, the Class 480 (wich nonetheless still has a good deals of similarities to the Type B trains).

*Unlike the U-Bahn, wich was split between the West-Berlin BVG and the East-Berlin BVB, the S-Bahn and all mainline railway services around Berlin, both in the western and eastern sectors remained under the administration of the East German DR for political reasons. This changed in 1984, following the West Berlin S-Bahn strike, with the East German government finally agreeing to transfer the S-Bahn lines in West Berlin (now a huge financial drain on DR, due to the competition of the U-Bahn, whose usage was encouraged by the West Berlin government) to the western BVG. This arrangment lasted a decade, until the formation of the current Deutusche Bahn in 1994 as a merger between the old West-German Deutusche Bundesbahn and East-German Deutusche Reichsbahn: as part of the merger, the newly-formed DB relieved BVG of S-Bahn operations.